As part of my coursework this term, I assessed the research on foot orthoses, the insoles that go in your footwear to (theoretically) improve foot and ankle alignment. The goal was to evaluate 3-5 journal articles, which required a very narrow research question. I focused on the ability of in-shoe orthoses to prevent recurrence of plantar fasciitis in amateur runners. Unfortunately, there's almost no research on that question, and the research that's out there is fairly old. Isn't it strange to think that research from 1981 is 40 years old now? Not that 40-year-old research has no utility, but with the advancements in shoe technology and biomechanical testing that have occurred in the past 40 years, I'd prefer to base my recommendations on research from the last 20.

You can read my full appraisal below, but I will summarize the main take-aways in lay language. There's very little research on whether insoles (custom or over the counter) can prevent injury in runners. Most of the research on orthoses looks at biomechanical and kinematic variables--running on force plates and looking at motion capture, that kind of thing--but doesn't directly measure the incidence/recurrence of injury. There are separate studies that connect those variables to various running injuries. For example, one study I read showed that there's a connection between vertical reaction forces and plantar fasciitis in runners. Another study showed that a certain type of over the counter insole reduced vertical reaction forces. Ergo, maybe those insoles will prevent plantar fasciitis. Unfortunately, that kind of connection doesn't mean much in academic research, because you never know what kind of unrelated variables might be causing both things. Until there's a study that directly measures those insoles' effect on vertical reaction forces AND plantar fasciitis, the connection is only speculative.

My conclusion is that there's not enough evidence to say that insoles help prevent plantar fasciitis, but based on what's out there, it doesn't look good. I wouldn't recommend insoles to my runner patients or clients for the purpose of preventing plantar fasciitis. Since I didn't evaluate all the research out there, I can't say for sure whether insoles might be helpful for other purposes. For my own training, and I imagine for many of you reading this, the question that interests me more than injury prevention is performance optimization. Could insoles improve alignment of the legs during biking to where you could get a few more watts to the pedals? Would better alignment from insoles lead to faster running times?

My guess is that there's even less research out there on those topics. And from what I've read so far, there's probably no performance benefit; in fact, insoles might decrease performance as the body tries to adapt around a device pushing it out of its groove. But I can't say for sure without more study. And if there's no research out there yet, maybe that's a project that I could take on in the future!

With that, thanks for reading! If you want the gory details, see my critically appraised topic below.

Background
A 44-year-old woman who enjoyed running and yoga presented to physical therapy with complaints of chronic plantar fasciitis. Upon examination, the patient demonstrated a structural forefoot varus with compensatory plantarflexion of the first ray. In cases of structural variation, compensatory changes at the foot may predispose athletes to repetitive trauma as the foot adapts to meet the demands placed upon it. In-shoe orthotics, whether over the counter or custom, may provide a means of external support, allowing the patient to return to her running and exercise routine without pain or future injury. This critically appraised topic seeks to summarize best available research to answer the question of whether in-shoe orthotics prevent recurrence of plantar fasciitis. Table 1 delineates the search methodology for this topic.

Introduction
Running is one of the oldest and simplest forms of recreational exercise, a component of almost all popular sports, and widely practiced by athletes of many ages and ability levels. However, running related injuries (RRIs) are common across the spectrums of age and ability, with incidence ranging from 18.2% to 92.4% depending on population and study.(1) Reporting of incidence rates is complicated by the definition of RRIs in studies and lack of systematic data collection (not all runners who experience musculoskeletal injury related to running will seek treatment), as well as differences in populations studied and duration/follow-up periods.(2) Physical therapists frequently encounter both novice and experienced runners with RRIs related to overuse. Preventing recurrence of these injuries after treatment also prevents reduction in training volume, improves health and wellness, and allows retention of the beneficial effects of recreational running. In-shoe foot orthotics have been presented as one way of preventing running injuries, with advertisements in both mainstream and professional publications.

The causes of plantar fasciitis in runners are often hypothesized to relate to training load, underlying biomechanical factors, footwear choice, age, ability level, and so on.(2,3) Elucidating the causes of overuse injuries in runners is potentially complicated by multifactorial interaction of stressors.(3) A too-rapid increase in running volume may overload the tissues without giving them time to adapt. In novice runners, even a 5-minute jog may be more than the soft tissue can handle. Structural or acquired alignment issues (e.g., forefoot varus, calcaneal valgus) may further predispose certain individuals to excessive loading that their soft tissues cannot absorb. Custom or over-the-counter orthotics may provide enough structure and support to allow such individuals to begin running without pain or injury.

Summary of research
Relevant literature on treating plantar fasciitis in runners goes back to at least 1981(4); however, developments in footwear, orthotic, and diagnostic technology led us to limit our search to research published in the last 20 years, i.e., since 2001. To broaden the results in PubMed, we evaluated the “Similar articles” and “Cited by” sections of older papers (those published before 2001) and narrative reviews, case series, and case studies found during the initial literature search.

Preliminary search of PubMed returned 4 results, including a clinical trial that addressed the outcome of interest.(5) Reviewing the references and citations of the PubMed articles revealed several randomized trials and systematic reviews of orthoses uses to treat plantar heel pain, but none that specifically addressed runners. Many trials examining the effects of orthotics in runners assess biomechanical measures, but do not directly measure plantar heel pain, incidence of running injuries, or clinical diagnosis of plantar fasciitis. An initial PEDRO search with the selected terms yielded no results, but a search using advanced parameters of keyword “runners,” therapy “orthoses, taping, splinting,” body part “foot or ankle,” and published since 2001 returned 22 records. Of those, three relevant clinical trials were found(6-7) as well as one Cochrane review that was mined for additional trials,(8) yielding one additional study.(9) Searching CINAHL Complete yielded three results, none of which were relevant or new. In total, four studies were included and are summarized in Table 2. 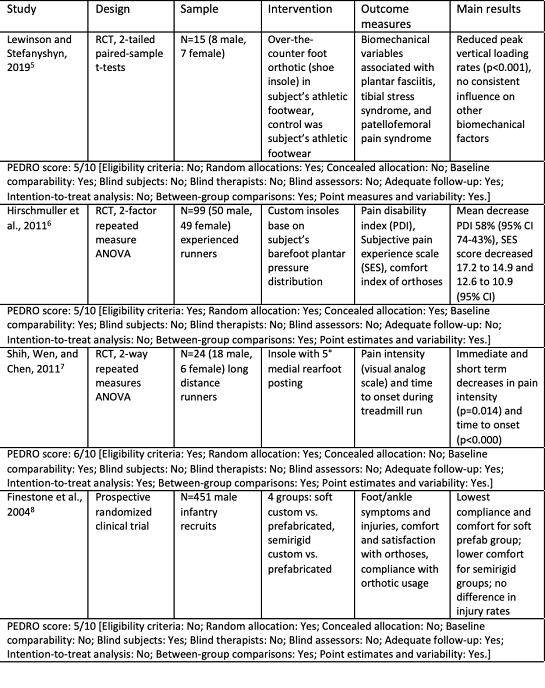 Discussion
Lewinson and Stefanyshyn(5) evaluated the effects of an over the counter insole (Dr. Scholl’s Active Series) on biomechanical variables correlated with RRIs, including peak vertical loading rate, which has been associated with plantar fasciitis.(10) They found inconsistent effects of the insoles on all measured variables except vertical loading rate, which was significantly reduced when subjects ran in their normal footwear with the insoles.(5) Although other authors have correlated vertical loading rates with plantar fasciitis in runners,(10) the authors did not measure injury incidence. The authors also did not explicitly recruit runners, although all trials involved the subjects running.

Hirschmuller and colleagues(6) examined clinical effectiveness of custom insoles for overuse injuries in runners using a randomized controlled trial. After both control and intervention groups continued their normal running routine, they found a significant decrease in mean pain disability index (PDI) and subjective pain experience scale (SES) in the intervention group and subsequent increase in PDI and SES in the control group.(6) The sample included multiple RRIs, and only seven of the participants suffered from plantar fasciitis. The Hirschmuller study measures pain and disability but does not examine recurrence of RRIs. These two factors limit the applicability of this study.

Shih, Wen, and Chen(7) applied a wedged foot orthosis to runners with history of patellofemoral pain or plantar foot pain with foot pronation in a randomized controlled design. They measured pain intensity and time to onset of pain during three 60-minute running tests (one to establish baseline, one immediately after application of an insole, one after two weeks of training with the insole). The intervention group (wedged orthosis) showed an immediate decrease in pain incidence and intensity and a further decline after two weeks running with the orthosis. The control group (flat orthosis) increased in pain incidence with an average decrease in pain intensity. Both groups showed increased time of onset to pain, although the effect was greater in the intervention group. This study did not examine recurrence of RRIs, and only one of the subjects suffered from plantar foot pain, which again limits the applicability of this study.

Finestone and colleagues(9) conducted a prospective study on military recruits to determine if type of orthotic (prefabricated vs. custom, soft vs. semirigid) reduces the incidence of overuse injuries in an otherwise healthy population. They found no statistical differences in injury rate, indicating that prophylactic use of insoles does not reduce injury rate in young, healthy males. The study did not report any baseline measurements of difference between the four groups, including differences in existing foot pathology. The study’s applicability is further limited by the sample, which consists exclusively of male military recruits with a mean age of ~19. It also does not specify how much running was involved in the basic military training the recruits underwent, and if the recruits ran regularly prior to recruitment.

Summary
Little recent research exists on the effectiveness of foot orthoses in reducing recurrence of plantar fasciitis in runners, a deficit noted by all authors of the included studies.(6-9) Considering the popularity of running, the high rate of injury and re-injury, and the commercial interests involved (i.e., manufacturers of prefabricated and custom orthotics), the lack of research—quality or otherwise—in this area is surprising. Given the results of the included studies, it is possible that more research has been performed but not published because of lukewarm results; if a company funds a study that shows no benefit to consumers who wear their product, they are less likely to disseminate that research. While some positive research exists from 30-40 years ago, the mechanism of effect was never established.(11) More recent studies examining the kinematic and biomechanical changes induced by foot orthoses fail to connect those variables to injury rates, so the benefit of foot orthoses remains largely theoretical.

Based on the current literature, there is no evidence to suggest that foot orthoses reduce the recurrence of plantar fasciitis in recreational runners. Custom and prefabricated insoles range widely in cost from $10 for neutral, prefabricated inserts up to $800 for custom orthotics. These products likely do not represent a good investment for most patients. Furthermore, since one possible mechanism of RRI involves introduction of unaccustomed stress with inadequate ramp up,(2,3) athletes who abruptly change their running mechanics with orthoses may predispose themselves to new injuries. Instead of prescribing orthotics, physical therapists should recommend gradual increases in training volume, proper footwear based on the patient’s needs,(8) and strength and conditioning exercises to best support the patient’s training volume and progression.