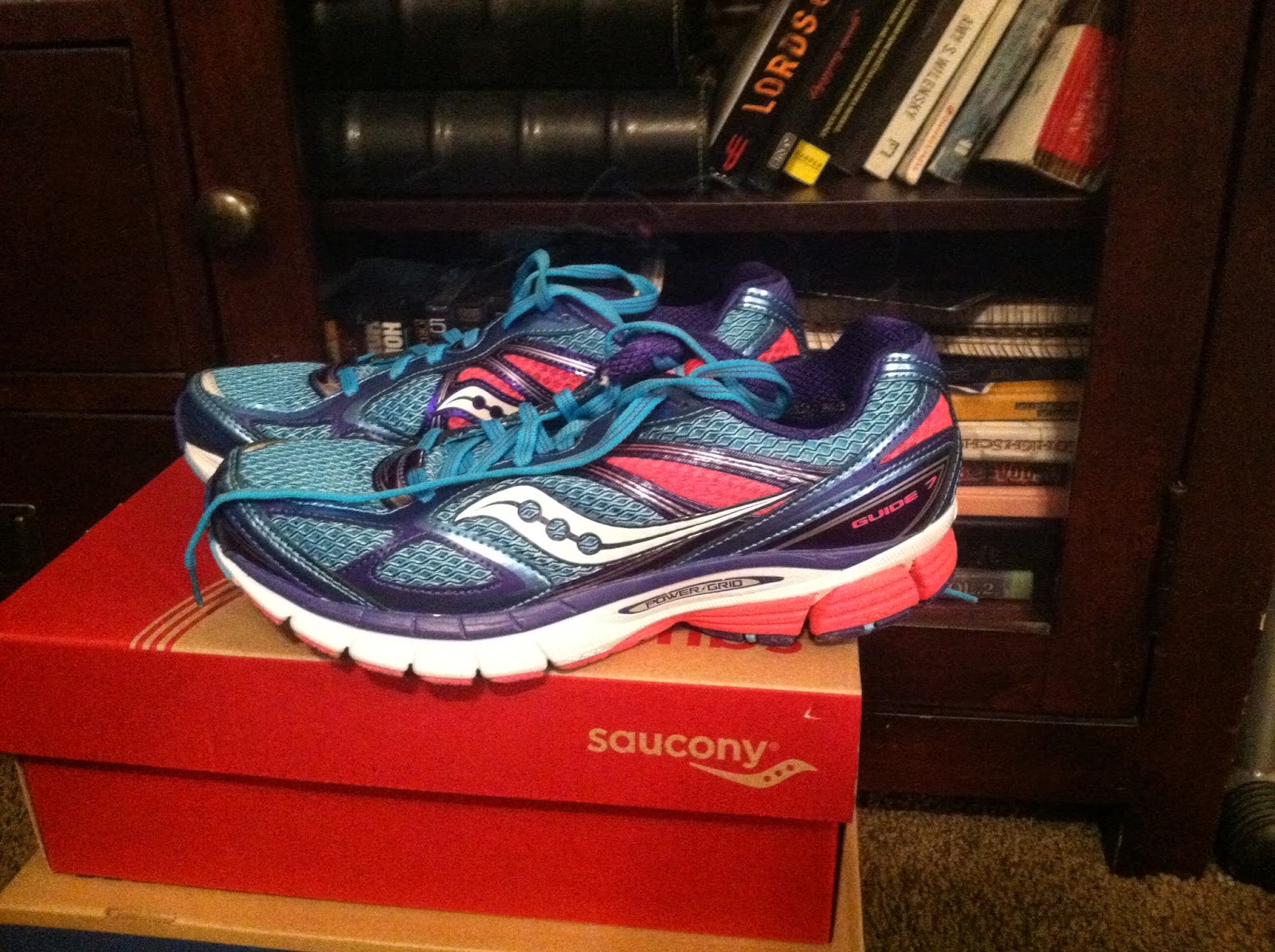 I got these shoes for free as a promotional item from Saucony. I did not pay for these shoes. I'm still trying to decide whether or not the free stuff I got through my Dick's job was worth the pain and suffering of working there.

Anyway, the Guide 7. Normally, I don't like stability shoes. I prefer to run in neutral shoes, even though I'm a moderate overpronator. Since there's no real evidence to support running in corrective footwear to prevent injury, I figure I'll run in whatever I want, and work on strengthening my lower-body kinetic chain, instead.

However, these are the best shoes I've ever run in. They have the perfect amount of cushioning for me, they have a moderate amount of stability that isn't particularly noticeable, they don't feel overly heavy or built up. My feet felt happy, running in these shoes.

I love running in Saucony shoes (even when they give me blisters), and the Guide 7 reminds me why. In these, I forget all about shoes, socks, and gear, and focus solely on my run. These shoes are what all running shoes should aspire to be.

My one issue with these shoes: I loathe the colors. I think it's the pink. I don't mind the blue so much. But they feel so good on my feet, I'm willing to overlook the colors, and plan to do the majority of my running in these shoes for the foreseeable future (I have a pair of Mizuno Wave Sayonara for speed training that I'll review soon). And when I wear out my free pair, I will buy another pair (in a different color). Thanks, Saucony, for changing my mind about stability shoes.
No comments:
Email ThisBlogThis!Share to TwitterShare to FacebookShare to Pinterest
Labels: gear, review, run, shoes

I got the go-ahead from my doctor this morning to go back to training! She did restrict me to 30 minutes max of cardio, though, and I have to stop again if my lymph node grows or gets painful.

I drove to the downtown KC airport this afternoon for a 45-minute bike ride. I figure 45 minutes of cycling is the same as 30 minutes of running, right?

The wind was brutal, and I was super slow, but I don't even care; I'm so excited to get to train again!
No comments:
Email ThisBlogThis!Share to TwitterShare to FacebookShare to Pinterest
Labels: bike, injury, motivation

Weekly Update: Back to Week 1

Today, I started my training over again after 3 weeks off on doctor's orders. I see my doctor tomorrow, and hopefully she'll give me the go-ahead to work out. Otherwise, I'm going to need to re-evaluate my training goals for the next two years. If I can't start working out this week, the Rev3 half-distance in September will move out of my reach, which means a full-distance race next July may be too big a stretch. I still have a hard lump in my armpit from an inflamed lymph node, and the elbow lumps are sticking around. They're small, though--I hope small enough that my doctor won't continue my no-exercise therapy.

I finished with Dick's Sporting Goods, as of Wednesday. I have never experienced such a negative working environment. Everyone (almost) that I talked to, at least all the other "associate" (retail monkeys) felt the same, but they didn't have better options. My over-arching feeling while working there was, "I can do better than this." The worst part was the walkie-talkies that we all wore. Managers would call down employees on the walkie-talkies on a daily basis. That's just terrible management. If you have an issue with an employee whom you supervise, that should be addressed in a private manner; public humiliation does not make for proper discipline in a professional environment. What's worse, when employees would explain their actions on the walkie-talkies, the management wouldn't take their concerns into account; they maintained their derogatory position, even if it didn't make sense, based on new information. Heaven forbid a manager should admit to making a mistake! Aside from publicly criticizing employees, they tried to delegate and direct employees without knowing the full landscape. One day, two managers told me to do completely contradictory things. When the first manager came back and asked why I was doing something other than what she'd instructed me to do, I told her I was directed otherwise; she was surprised, and put me back on the original task (which, honestly, was the one that made more sense). You'd think these managers would talk to each other and craft priorities as a group, but no. Each one of them knows best. Except that none of them knows best, because none is particularly intelligent.

So the management was the worst of it, but there were other things. I quickly became (in my own opinion, at least) the most competent person in the footwear department. The most competent. Within a month. It's more proof, first of all, that I'm too good for that job. But it's also an indication that no one really cares, or wants to work hard. That comes from the top down; part of the reason the managers rarely knew how to direct us properly was that they were never working with us. And I imagine that managers higher up the corporate chain set that unfortunate example for the managers of my store.

In short, I now think that Dick's is a terrible company. I don't know if I'll shop there ever again. There are plenty of other big-box sports retailers, and I prefer to give my money for biking and running to locally-owned merchants, anyway. I'm much, much happier, now that I'm done with Dick's. QuikTrip is a great company--one of the most positive work environments I've ever experienced. And the schedule will allow me more time for training, anyway. There are much better prospects for advancement. And I enjoy my job. Thanks to those of you who left encouraging comments for me. I know I seemed down after my last post. I'm in a much better place now.

My dad did his first marathon on Sunday in Abilene, Kansas. Maybe I can get him to do a race report for me! I'm super proud of him, although I'm jealous that he beat me to that distance!
1 comment:
Email ThisBlogThis!Share to TwitterShare to FacebookShare to Pinterest
Labels: injury, marathon, update

I gave my two weeks notice at Dick's. It's a relief to be done with that job. It was a poor fit for me.

I've also re-tooled my training schedule to focus on shorter races during the summer, then build to the Rev3 Half in September. It will give me plenty of time to build my fitness up, without getting injured. Hopefully, I'll get the go-ahead from my doctor to get back to training next week!

I'm a little concerned about money; I was very excited about the amount I was making working two jobs, but with just QuikTrip, it's going to be tight. I feel like I'm better than this. I'm in the 98th percentile, in terms of intelligence. I became the most competent person in the footwear department at Dick's in a matter of weeks. How am I just scraping by nearing age 30, while plenty of people (who are not nearly as smart or capable as I am) my age are settling comfortably into the middle class?
2 comments:
Email ThisBlogThis!Share to TwitterShare to FacebookShare to Pinterest
Newer Posts Older Posts Home
Subscribe to: Posts (Atom)