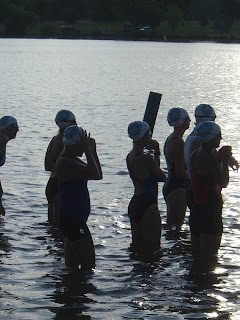 I consider this race to be vindication for last weekend's missed opportunities. Could not have asked for better weather, better atmosphere, or a better performance from myself.
Pre-race
Since my parents missed church last week, I was on my own for this week's festivities. I prepped everything (including breakfast) solo, the house dark. The advantage? I got out at exactly the time I wanted to leave.
Breakfast was peanut butter and toast, by the way.

I got to the lake while it was still mostly dark, just as it should be. There were only a couple dozen people there (not including volunteers), at that point, so I had my pick of parking. Early arrival was a great advantage because there were no assigned rack spaces, so I got my pick of bike racks, too. I chose a spot that was farthest from the swim out, with a straight shot to the bike out.


I went through the normal pre-race rituals--packet pick-up, setting up transition, easy warm-up jog--and by the time I'd gotten through all that, transition was filling up. Mudwater is a great race for locals. There are a few competitors who come from Oklahoma or Missouri, but most live in or around Wichita. This race is in its third year, the field has been limited to 250 participants, and it is really becoming our race. Which is an amazing thing to behold.
First-timers represented about 40% of the field, between the tri and du, and two of those first-timers were my clients! I also met a reader (first time that's ever happened) who was doing her first tri; good work, Stacy (and did I spell that right?)! I cannot put into words my pride at convincing people to do this crazy sport. Always amazes me.
My own feelings leading up to the starting gun (a shotgun, by the way) were of excitement. No nervousness. The brooding energy that I had stored up for a week due to the inclement weather at last week's event was finally harnessed, concentrated. I felt wound up like a slinky at the top of the stairs; just tip me over and away I go! 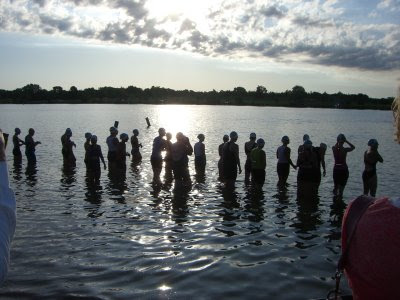 Swim: 750 m, 14:23 (1:55/100 m); 13/51 F overall
Last year: 15:36
Weather could not have been better. Water temperature was 84 degrees, which is a little warm. But I had no problems with overheating. Last year, we had a beach start; this year, we started in the water. At the shotgun, I dove right in (I'd made sure I was deep enough that I wouldn't have to run or dolphin dive before I started swimming). I tried to surge, tried to get myself out of the anticipated mass of humanity. But after taking several strokes and turning my head to breathe, and beheld (to my amazement) a whole crowd of women who were walking (not running!) through the water. What the hell?! Dive, ladies, dive!

Needless to say, I had clear water for the first part of the swim. I was, however, able to jump on the heels of a few women who were just enough faster than me to be of benefit. I lost them once we caught up to the few stragglers from the wave before us. I felt fast and strong throughout the swim. I gave just enough energy to maximize my time in the water without spending too much energy and suffering later. I dolphin dove to the shore (pretty sure I'm the only one at this race who does that; when I was coming out there were still people walking in to the shallows) and sprinted up the slight incline to transition. In my mind, I was a famous ITU athlete, tall and athletic and strong. 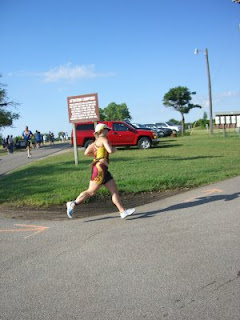 Coming out of the park was a blast; I sailed past a few of the men, scrambling to get my feet into my shoes. I took the sharp left-hand turn out of the park like a pro--butt to the side, low over the handle bars, upper body relaxed. Right out of the driveway, there's a slight hill (very slight; remember where we are, after all). I powered up it like it wasn't even there. About 5 km into the bike ride, another woman crept by me. As she passed me, I noticed the age on the back of her leg. 47. "No way!" I thought to myself. Not that I don't think a 47-year-old woman should be able to pass me; it's just that I wasn't going to let it happen on that day. I motored by her at the next downhill and spent the rest of the bike course keeping my foot on the figurative accelerator, just daring her to try to pass me again.

I wasn't passed by another woman the whole time.

Like I said before--the weather was perfect. On back side of the bike, we had a little bit of east wind, and I saw my speed drop significantly (no more average speeds in the mid-20s!). It was frustrating, and I was hurting a little bit. I definitely felt like I lost steam on the second half of the bike. I spent a lot of time worrying that I was putting too much into my second leg, and wouldn't have enough energy left to have the kind of run I knew I could put in this year. My calves and hamstrings were tight and cranky, and I've discovered that the bike is both my strength and my weakness--I can put a lot of time into the competition when on two wheels, but I sometimes push too hard and pay the price on the run.

Turning back into the park (a little less than a mile from T2), I dropped gears and started spinning my legs out. Got my feet out of my shoes and had some of the men pass me, but knew that I would re-gain that time in transition.

T2: 30 sec; 6/51 F overall
Last year: 49 sec
Nailed the flying dismount like a pro, but then had so much speed that I overshot my rack space by a few feet and had to run back towards it. Still, pretty damn fast, don't you think? 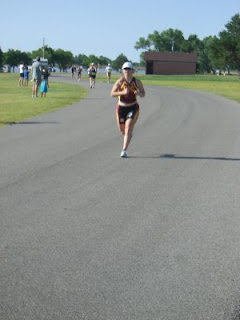 Run: 5 km, 26:24 (8:29/mile); 22/51 F overall
Last year: 31:05
This was the highlight of the race. Not because I'm super fast, mind you; this is my weakest leg, relative to the rest of the women's field. But because it's just so much better than last year. That's a minute and a half faster per mile than what I was doing last year. I am totally happy with and excited about the progress I've made this year in the run. My biking and swimming times are better, but not that much better than last year's. But my run? My run has improved in leaps and bounds.

My one point of contention with myself came in the last quarter mile or so. I was within sight of the finish line, and a big clydesdale came clomping past me. He works out at my gym; I see him around all the time. He was at IMKS. He was running just a little bit faster than me. I tucked in behind him, his huge frame in the foreground, the finish line behind. I stayed with him for maybe 50 yards, and then he started to pull away. And I decided that it hurt too bad, he was too fast, and I let him go.

But other than that, I thought I was very willing and able to accept the pain that should come in a sprint tri. I determined early in the bike that I would go to that place of intensity and focus, and felt like I was actually able to do it this time.

The best part, as always, is the last few yards before the finish. I come closer and closer, the crowd getting nearer and the end within reach; I always think, "I'm not going to be able to do it, this time; I don't have enough left for a strong kick." And every time, usually in the last 20-40 meters, I find that I do have enough left. The exhaustion of all the miles leading up to that point falls away, and I find myself capable of anything.

I love that feeling. 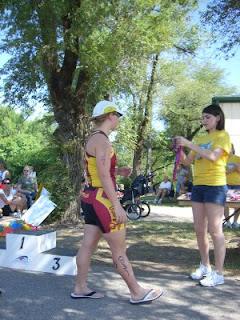 Final: 1:26:58
Last year: 1:26:31 (with 5 km less on the bike)
Two years ago, I was looking at the results from Shawnee Mission and trying to decide how well I could realistically do, if I were able to achieve what I considered to be my potential. I looked at times from previous finishers. I looked at the overall. I looked at the age groups. And I decided that if I could swim at a 2:00/100 m pace (which I knew I could) and bike at 20 MPH (which I was sure I could) and work my way down to an 8:30/mile pace on the run (which I thought was possible) . . .

I could potentially work my way in to the top ten overall women.

Take a look at the times above, and then check it out. 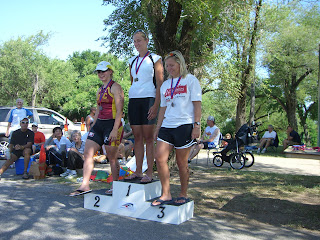 So there you have it. It didn't happen at Shawnee Mission (which, admittedly, is a much more competitive race than Wichita's favorite tri), but who's to say that I couldn't have done similarly well on that course on that day? I think I have it in me.

Of course I have my sights set lower, now. Because theoretically, I'm sure I could swim a 1:45/100. And bike 22 MPH. And run sub-8:00 . . .
Email ThisBlogThis!Share to TwitterShare to FacebookShare to Pinterest
Labels: improvement, race, race report, weather, wichita