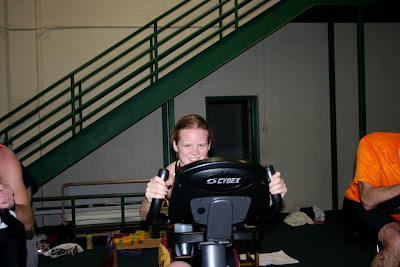 Ah, back into the racing of swim, bike, run in sequence. How I've missed it. Now if we could just move it outside . . .
This triathlon, like so many of the indoor races, broke competitors into small groups (8 people per heat). 500 m in a 5-lane pool, 6 miles on a stationary (not spinning) bike, 2 miles on an indoor track. I was in the 3rd heat, seeded at an 8:30 500m, with a bunch of guys. Out of 8 competitors in the heat, I was the only female. I shared a lane with Lonnie, who was right behind me at the Derby Rock 'n' Route Tri.
Neither one of us was much fun as a lane-mate, I think. I was definitely encroaching in his space. He stayed right in front of me for the first 200 m or so. Then I pulled up even with him, but never quite passed him. I swam my own pace as much as possible, and breathed bi-laterally to avoid the splashing from him and the guy in the next lane over (the lane ropes at the Central Y are yellow string with bits of blue foam noodle). I stuck with flip turns for the first couple hundred, then switched to open turns, because I was having trouble coming off the wall straight. In the last 100 m or so, Lonnie surged, and I let him. I picked up my pace just enough to stay on his hip, and tucked in a little closer to him. He pulled me home, and I beat him to the wall. Didn't bother with shoes or a towel; just took my cap and goggles off and ran (delicately) up the stairs.
Can I just say now that stairs are the worst part of indoor triathlons? You almost never encounter stairs at real races (UCSB and CSULB are two exceptions that I've seen)! I guess we'll just say it's practice for hills, which is something you don't have to deal with at all indoors.
The bikes were Cybex stationary bikes, standard-issue cardio equipment. These bikes are not at all attuned to the fine needs of triathletes' bodies. We are used to being crouched over and uncomfortable and aerodynamic. You could put Grandma on one of these bikes for physical therapy. It's way different than a spinning bike, even. The strategy with this kind of equipment in an indoor race is to push as hard as you can. A fast cadence will not be as effective as high resistance. So (if you're planning to do an indoor race on bikes like these) just turn up the resistance and push the pedals.
Of course, the disadvantage to that kind of biking is that your legs fill with lactate and feel like lead as soon as you get off the bike. Add to that the fact that you probably have to run upstairs to get to the indoor track, and you have a recipe for pain.
I could barely walk, let alone run, by the time I finished my six miles of Cybex hell bike leg. So I sort of clomped up the stairs and onto the track. My strategy for the run was to go easy for the first 14 laps (1 mile), then gradually build speed through the second half. I started relatively conservatively, but at a strong pace. The guys in my heat were mostly so much faster than me on the run that chasing them down wasn't even an option; the most I could do was try to minimize the number of times that I got lapped. I think Lonnie lapped me at least 5 times (of course, the lap is only 100m long, so lapping doesn't carry quite the same weight). He finished a good 5-6 laps ahead of me, but he and Alan stayed upstairs and cheered me in to the finish.
There used to be a trash can at the end of the first straightaway on the track. It was gone this year. I missed the comfort of knowing it was there after sprinting the last two laps.
I was happy with this race. It was short and fun, but it's not at all an indication of what I'll be capable of this year. It was a nice diversion, and a good time.
There were hardly any women there, it seemed. Only one in the first heat, two or three in the second heat, one in my heat, one or two in the next . . . maybe twenty out of the eighty competitors were women. I placed second out of all the women overall, and about 24-25 down in the overall rankings. First in my age group. Also, this is probably the last race I'll ever do in the 20-24 age group. Starting this year, I'm 25-29. That's only one age group shy of 30-34. Sigh. I feel old.
Total: 42:30
Swim: 8:30
Bike: 19:00
Run: 15:00
Not sure where the T1/T2 times fit into this, and I'm pretty sure that the run was a couple laps shy of two miles.
Email ThisBlogThis!Share to TwitterShare to FacebookShare to Pinterest
Labels: race, race report