My First Time on Hokas 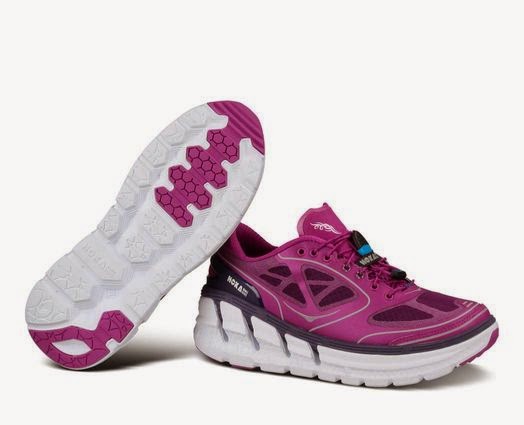 Have you seen (or worn) Hoka One Ones yet? They've been on-trend in the running community for the past year or two, sort of a backlash to the minimalist running movement. I've seen them at a few races, and in stores and magazines. I don't agree with the premise behind them, that cushioning is good and more cushioning is better, but I like how much research and experimentation they put into the initial prototype. And there are some (non-sponsored) people I'd met or read who like them.

The running store next door has weekly runs on Tuesday nights, and often they'll have tech reps from running companies come with their kit for us to try. Last Tuesday, it was Hoka's turn, so I decided to try them out, so that I could offer a more informed opinion on these shoes. I didn't want to disparage something I hadn't even tried.

I ran 3.5 miles in them, and I hate them. They were excruciating, especially on downhills. I felt like they absorbed all of my momentum with each step. I could feel myself landing noticeably harder on the downhills, and I had trouble getting my body weight over my feet instead of behind them. When I'm doing short runs (6 miles or less), I try to keep my feet awake; I try to feel what my feet are doing, so that they stay engaged. Hokas made this mindfulness exercise impossible. The shoes are designed to let your feet fall asleep. They're designed to make your feet stupid.

All of the little niggling aches and pains that show up from time to time (usually when I'm weak, tired, or overtrained) came out at once: my knees hurt, my hips hurt, my back hurt, my Achilles tendons were in agony. By mile 3, I wanted to walk, and seriously considered it, because I feared I might do damage to my body by continuing to run in them. When I got back to the running store, I took off the Hokas and experienced instant relief in my achy joints. I walked home barefoot, because even my Brooks Ghost (which I wear to walk around and for recovery runs only) were too cushy for how my feet were feeling.

So I do not like Hokas, but there are people who do (this guy gives a more unbiased rundown of the advantages and disadvantages), and they seem to be great for running on rough trails. Of course, that's because they soak up all the natural feeling of the ground, increasing the inability of your feet to do functional work . . . Can you tell I'm still a minimalist at heart?

I'm not saying they're bad shoes; they're just terrible shoes for me. Also ugly, but that's a matter of taste as well. I'm pretty set for shoes right now (Saucony Guide 7 for long runs, Mizuno Wave Sayonara for tempo work, Brooks Ghost 6 for recovery), thanks to my short stint at Dick's. It's nice to try some new things, though, for the next time I'm in the market. I'm happy to have had the opportunity to try the Hokas, even if they did ruin my Tuesday night run.
Email ThisBlogThis!Share to TwitterShare to FacebookShare to Pinterest
Labels: lesson learned, review, shoes