"But Jamie," I hear you say, "Wasn't this race supposed to be a road race, not a time trial?"

Yes. Yes, it was a road race. But circumstances on the day led to me performing a 15-mile time trial solo, instead of covering attacks and trying to match sprints.

The morning was cold, well below freezing. Emily and I got a late start from the hotel, so I was already stressed about the schedule. Then there was a long line of cars waiting to get into the park ($4 parking fee, only one poor, overworked ranger collecting cash). By the time we parked and I picked up my number and got my trainer set up, I had about 10 minutes left to warm up. I had planned on 30-45, especially since it was so cold! 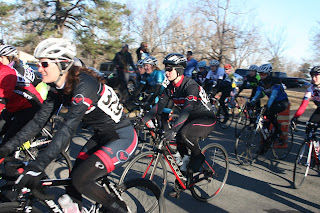 The race began with a 2-mile neutral roll-out. That gave me time to warm up further. I had one teammate at this race. We stayed close together through the neutral roll-out. The pace was variable through the early stages, even after the neutral roll-out. I felt bad for grabbing my brakes all the time, but there was no avoiding it in that bunch. We were about six or seven wheels back, so I can only imagine what it was like in the back of the pack. I imagine that's why, within the first few miles, I heard a skid and a crash behind me. I don't know how many women went down in that one, or if it broke up the group much; I didn't want to look back to see.

This course had a hill big enough to have a name: the KOA Hill, named for its proximity to a KOA campground. It was there, on the first hill of the day, where my race went to seed. A girl two wheels in front of me (inexplicably) went down. Maybe she was in too hard a gear for the climb and lost momentum? I don't know. But she went down, and the girl behind her went down, and I got unclipped in time NOT to go down, with Robin (my teammate) shouting, "Don't stop, Jamie!" But girl #2 had her shoe caught in my spokes (which is the closest I will ever get to being like Wout van Aert). After we got disentangled, I made my big mistake: checking to see if everyone was okay. Everyone was fine, and my bike appeared fine (although I realized later that my speed and cadence sensor got knocked around, somehow), and in the space of those few seconds I realized I had probably just screwed myself out of ever catching on to the peloton again. I got back on my bike as quickly as I could and started chasing like fire to get back onto the pack.

I can't remember if I could see them after cresting that first hill. I know I didn't see much of them for the rest of the race. A few times, I saw the lights of the police car and the neon yellow jacket of the motorcycle official. Once, they looked to be well over 400 meters away. The second time up the KOA Hill, they looked within reach. But there were half a dozen cars between me and them, and they were out of sight again by the time I got through the cars (actually, I only got past two; the rest sped away when the peloton turned a corner).

So I ended up time trialing as hard as I could for an hour, trying to catch on to the group again, knowing that it was pretty much impossible. I passed three or four women who had fallen off the back of the pack, a group of collegiate men from the field that started 10 minutes ahead of us, and a few cat 5 male racers. Not sure what happened to the other women who got caught in the crash. I briefly considered packing it in after the first lap, since I was unlikely to catch the group. But I figured I might as well get a good workout in, since Emily and I had driven down for it.

The results aren't out, so I have no idea where I placed. But Robin got second, so that was pretty cool! Another of my teammates won the men's cat 3 race outright. So the team had some sweet success. I think all the cat 4 men were just grateful to have gotten through their race without crashing. Sounds like there was a lot of squirrely riding going on out there.

I really wanted to find out where I'm at in my cycling training, to get a better sense of what to train going into my first build phase. I'm disappointed that all I really learned was that I can time trial pretty well. Which, duh, I'm coming out of 10 years of triathlon training. I really don't need to work on my time trialing, at this point. And I'm sad that I wasn't at the end of the race to help Robin out. Based on what I saw of the pack early on, and the people I blew past later in the race, I think I could have hung strong with all of the women until the end.

What I learned, though, is not to stop when a crash goes down in front of me, especially if there's nothing wrong with my body and my bike. I also learned, based on the data I have from my time trial, that my threshold heart rate is probably 5 BPM higher than I thought. I wish I had a power meter, so I could see what kind of power I sustained for the 45 minutes or so that I was on my own. I averaged 18.8 MPH throughout that, and that's with a couple little hills. 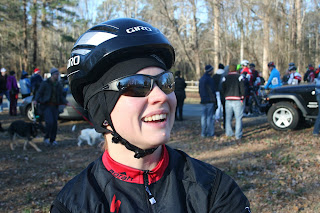 I hope I'll have better luck in my next race. I didn't get the vindication I wanted. I'm eager to try for it again soon!
Email ThisBlogThis!Share to TwitterShare to FacebookShare to Pinterest
Labels: cycling, race report