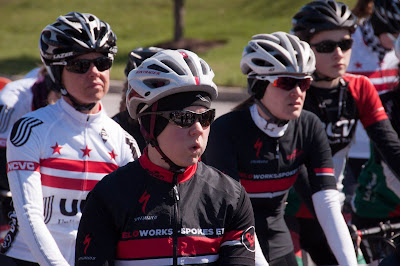 I've been putting off this race report because I'm not very happy with how I did. It took me a while to get over my frustration about the race, how it went down, and how I performed. I finally got over myself, though, once I stopped my navel-gazing long enough to realize that nothing was that bad: I didn't crash, I didn't cause anyone else to crash (I don't think), I got some experience racing in big, sketchy fields . . . It wasn't all terrible.

I got to the race site in plenty of time to warm-up, riding the course in reverse. There were 5 of us in the Cat 4 field. Our team captain is a Cat 2, racing in the field just before ours. We all warmed up together. I kept going too hard in the warm-up, dropping everyone else. My legs felt really good (maybe a little bit too good).

The Cat 1/2/3 field staged directly in front of us; they departed a minute ahead of us. Our plan was to take the pace off fast, try to establish a breakaway, and lead out our A rider if the field stayed together. I don't remember much about the early laps; the field stayed bunchy, everyone seemed a little jumpy, and there were a few really sketchy wheels. We couldn't get a break off the front, but the pace in the pack wasn't difficult at all. The field got especially slow on the one tiny little hill. My job was to sit in the back and protect our A rider, though, which went okay for the first lap or two. I remember trying to move the two of us up in the field over and over, but everyone wanted to be near the front, and we kept ending up near the back again.

It wasn't far into the race--maybe second lap?--when we got within sight of the Cat 1/2/3s. Our Cat 2 Captain told us later that the moto officials told them that the Cat 4s were only 10-15 seconds back from them. Then the pace picked up with a few attacks. But it only took another lap or two for the Cat 4 fields to completely overtake them.

Standard rules for races like this are a little like triathlon rules in that you can't work with the riders from the other field. The officials went over that rule in detail before the race started. We also had a centerline rule in effect, which meant we could be instantly disqualified for riding on the wrong side of the center yellow line. We started to overtake the Cat 1/2/3 field just as the road narrowed a little. I think our whole group was unsure of what to do. We knew that we needed to get past the field as quickly as possible, but we also couldn't go past them on the left because of the centerline rule. Adding to the confusion, all of our numbers started with 5; the 1/2/3s had numbers 500-520, the cat 4s had numbers higher in the 500s. That made it really difficult to tell the fields apart. Apparently, the moto officials made some effort to separate us ("Sort yourselves out, ladies!"), but it was too late. The fields were together, and they stayed together for the rest of the race.

From that point on, our team plan was out the window. I tried to hold our A rider on my wheel, and tried to find one of my other teammates to lead the two of us out in the last 2 laps. About the time I found my teammate, who was in the center near the front of the pack, the rider on my left bumped in to me and I leaned into my teammate. I don't know how the heck we stayed up, but we didn't crash. From there, I tried to get us to the outside of the pack, but lost my two teammates in the process. I was in good position all on my own.

I accelerated out of the last hard right turn (which was a shit-show, pardon my language, for the entire race, with inexperienced riders cutting the turn and causing chaos with a complete inability to hold their lines) and passed a bunch of riders on the left. I was in the gutter on the left side, on the front with no one to work for. Things slowed down a little coming up the last hill. Team captain was on my wheel, noticed me slowing and told me to pedal. I thought it was my A rider telling me to start the lead-out, so I hammered for a hundred yards, blew myself up, watched the whole field pass me, and ended up 28 out of 33 finishers. I felt like a big pile of dog doodoo. By the time I came across the finish line, I was totally recovered. I didn't feel tired at all. I still had a full tank of gas. I had wasted a great position going into the finish. In short, I sucked.

I spent the rest of the day cranky and stewing. Same thing for Monday morning. I was stuck in a spiral of "I suck"-ness, and I couldn't get out of it.

Then our Cat 4 captain sent out her race report, and I remembered that she got third place! Here I was, feeling so sorry for myself, completely discounting the fact that she had pulled a really great result out of a really bad situation. Instead of navel-gazing and feeling sorry for myself, I should be celebrating our team accomplishment!

Part of what was so frustrating about the whole race was trying to figure out what I could have done better. What were lessons that I could take from this race where I did such a poor job, both for my team and for myself? Here's what I've come up:


So that was Carl Dolan for me. Crappy factors outside of my control, exacerbated by me taking myself too seriously and trying to hold on to a race plan that was (or should have been) obviously out the window. This weekend is another chance to do better. Farmersville Road Race, here I come!
Email ThisBlogThis!Share to TwitterShare to FacebookShare to Pinterest
Labels: cycling, lesson learned, race, race report