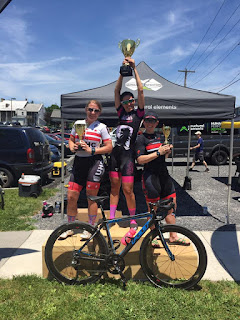 In which I redeem myself and then hang on by the skin of my teeth.

I elected not to stay overnight in Hagerstown. Emily didn't want to travel for the weekend. She spent the first week of June in Seattle, I spent the second week in Wichita, and she's in San Francisco this week. So she was (understandably) not feeling the weekend trip vibe. I caught a little bit of flack for signing up for a weekend stage race. So I elected to drive up and back on Saturday, then up again on Sunday morning. It takes a little over an hour to drive up there, and my TT starting time was 7:19:30. I woke up at 4:40 and left at 5:05 to get to Boonsboro in plenty of time to warm up for my TT.

Also, the drive to Washington County is about an hour and ten minutes. I've learned that I have about 45 minutes from the time I start drinking coffee to the time I have to go the bathroom in an emergency kind of way. Fortunately, I made it to the port-a-johns in time to avoid humiliation.

The 10-mile TT went well for me. I started 30 seconds after the GC leader (reverse alphabetical order by last name, not by road race placement) and one minute after one of the few athletes who finished behind me in Saturday's race. I saw them both at the turn-around, passed my one-minute rabbit at around the 8 mile point, but never saw Angela (who ended up getting first in the GC) again. The time trial was hilly, and I did it in 2:13.1, with an average speed of 21.3 MPH. Not bad, considering the terrain. I got third place and moved up to fourth overall in the GC.

My car has been leaking oil since I came back from Wichita, so I stopped between the TT and the crit to buy a couple of quarts of oil. Put them in the car, bought some food, drove to the next race venue with the intention of taking a nap. As I turned off my car, I thought I saw the oil light come on. And I thought, "Oh crap." So I got out and peeked under the car and it was spewing oil. Okay, not spewing, but dripping pretty steadily. And I was so worried about it! What if it was going to mess up the car to drive it home? What if I got stranded in Hagerstown and couldn't get home EVER? What if I ruined my car and had to buy a new one? Basically, my recovery sucked and I hadn't eaten enough food and I was really tired and stressed from all the racing . . . I couldn't sit still so I started riding the course, thinking the whole time about how I was going to get home . . . I literally made myself sick with stress over the stupid car thing. By the time we started staging for the crit, I thought I was going to throw up. I'm usually pretty mellow about stuff like this, but for some reason I could not get out of my own head going into the last race. I lined up wanting to fall off and get pulled and be done with it.

Then the racing started.

As I mentioned in the road race report, the cat 4 women raced with the 1/2/3s. Same thing in the crit, and there were some really strong women entered. Tour of Washington County offers a yellow jersey, a sprinter's jersey, and a QOM jersey, in addition to pretty good prize money. There was a good 1/2/3 field at this race. Before the crit, several of the girls were talking about Clarendon and Philly. Clarendon is on the domestic pro calendar and Philly is a women's World Tour race. These girls were good.

They took the pace off hot from the whistle. From the second turn, I was already thinking, "Oh no, I'm never going to be able to hang on for this." I needed to finish within about a minute of the 5th-place cat 4 girl to maintain my GC standing, and I thought I saw her in among the 1/2/3s, so I hung on to the back of the peloton for dear life, dangling on every turn. I lost track of time and space. My only thought was to stay in touch with the group for as long as possible. Angela and Theresa, who were in first and third in the GC, were in front of me within view. I looked back after a time--no idea how long--and the only thing behind me was the moto. There were several times where I dropped off the back of the pack and fought my way back on. There was even one time when the moto passed me, but I took a few corners well and accelerated enough to come back into touch with the main group. I was hanging--just barely--but hanging. It was the hardest racing I've ever done.

Theresa, Angela, and I all fell off and got gapped at one point. I was hanging onto their wheels as they fought back up to the group. I was so gassed that I couldn't help them--it was all I could do to hang on! Then (and, based on what happened next, I can only assume that everyone slowed up significantly) we came around the final turn on the course and I somehow managed to slingshot around Angela and Theresa and pulled back up to the main group! I even shot up the side a little bit and got back into the pack!

Then we turned the first corner on the course. By chance, I looked down at my Garmin. 7.85, it said. Halfway through the race. At that point, my mind broke. I could not overcome the thought that I hurt so badly and it was only halfway through. My brain told me that I couldn't do the second half of the race, and I listened.

The gap opened. Angela and Theresa came around me and chased back on. I gave up.

I drifted off the back, gasping for breath, but knew that I would have to keep pedaling at least enough to get back to the start/finish line, and probably past that before the officials would pull me. So I kept pedaling, taking the turns as quickly and smoothly as I could, trying to recover through the straight aways.

On one of those straight aways--this was probably two laps later--I noticed that Angela and Theresa had popped off the back of the 1/2/3s. They were within sight. I'd like to say that I decided then to chase back on, but really I just wanted it to be over. The officials left me in, though, so I figured I could at least try to bridge up to them; I wouldn't have objected to being pulled from the race, but there was no way I was going to quit without the officials making me. Spectators--not just people from my team, but from EVERY team--were cheering me on, calling my name, shouting out time gaps . . . But they couldn't see me slumping over my handlebars on the backside of every lap, gasping for breath like a chain smoker on an autumn walk.

The officials finally pulled me at four laps to go. Theresa and Angela hung on until two to go. Angela got first, Theresa got second, and I got third. None of the cat 4 women finished all 21 laps of that crit with the 1/2/3s. They drilled us good. I'm so glad that bike racing isn't my job. Makes me want to be a cat 4 FOR LIFE.

Hanging in the crit for as long as I did vaulted me into third place overall, with Theresa in second and Angela taking the win. It's cool to place well in the race, but it was a real bummer to have supplanted my teammate, Kim, who kicked so much butt in the road race. She had an extra 15 miles in her legs from finishing the road race, while I got pulled after the third lap. We talked after about how it might be a legitimate strategy in future years to drop off the back in the road race and make up the time in the TT and crit . . . But you never know. Bike racing takes fitness, but even with the best fitness, it's a gamble. Lots of fit riders never win a race. Sometimes it comes down to luck.

Overall, it was a good weekend. I'm glad I could represent my team, Veloworks-Spokes, Etc., and that we had someone on the podium. And I got a trophy! Even though the courses were tough and the racing tougher, I plan to be back on the starting line at Tour of Washington County next year with my fitness, recovery, and mental fortitude dialed in. 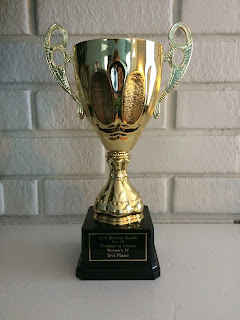