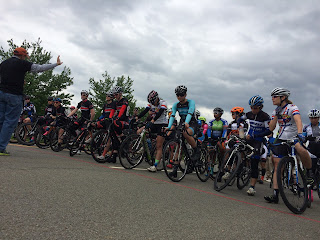 I'll try to keep these brief, because there are three!

Of our cat. 4 group, I was the only woman registered for Bunny Hop on Saturday. Ride Sally Ride (Sunday) was the big team-focused race. My plan was to go to Bunny Hop and get as many upgrade points as I could. I want to be able to upgrade to cat. 3 with the rest of my team, because many of them are close! I'd never done Bunny Hop before (it was cancelled last year) but it was on a new course this year anyway. The race organizers had posted a video of the course, which made it look very technical with rough pavement. Many of us were nervous about how the course would play out, especially in a beginners' field with rain in the forecast.

We needn't have worried! The course was fun and safe (or as safe as bike racing can ever be) and it stayed dry in spite of occasional cold, spitting rain. It was in a derelict office park that's now used for autonomous vehicle testing. The pavement was fine, smooth through most of the course with only a few well-marked potholes and seams. The finish line was on a long, curving, exposed stretch that started out head-crosswind and ended with a tailwind past the line. Then there was a hard right turn with a tailwind and a slight downhill, a few sweeping curves into a short uphill, a right-left chicane and a hard right turn, then another gentle turn to the left about 300 m from the finish line. A somewhat technical course, and I wouldn't want to take some of those corners more than three abreast (almost never a concern in the fields in which I race), but it felt safe to me throughout my races. 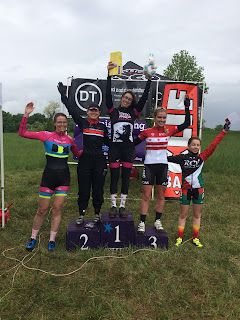 Bunny Hop Criterium Women's 4/5
Scoping out the competition before the race, I had my eye on a fellow racer from Sticky Fingers. I knew her wheel would be trustworthy where many of the women were of unknown reliability. And I was pretty sure that if we teamed up we could get a gap on the field and stay away.

With so many unknowns in the field, I started the pace off hard to set an expectation for a fast pace. I settled in after the first turn and let the field come back together a little. I looked back to see if everyone was still there. I tried to keep the tempo high and encouraged the front 5 or 6 women to work together to force a selection. That continued until the first preme lap, which I used for it's intended purpose--to create a break! I took that lap hard and won the preme, then kept going at slightly higher than tempo pace to see how long I could stay away. Five or six women came back to me, and we started working together to keep the pace high and make that selection stick. When the pace slowed down significantly on the climb, I attacked across the road and got a gap. Stayed away long enough to get another preme, looked back and Sticky Fingers was on my wheel. Yay! This was what I wanted to happen!

We worked together for the rest of the race. I told her to take the third preme, and we kept our rhythm going until the last lap. I heard after the race that one of the chasing pack tried to bridge up to us and almost made it but blew up and drifted back. My Sticky Fingers compatriot took the front on the last lap, which ended up well for her because she was strong enough to ride me right off her wheel! She gapped me on the last climb and I couldn't claw back before the end. She took the win and I took second place a handful of seconds later. 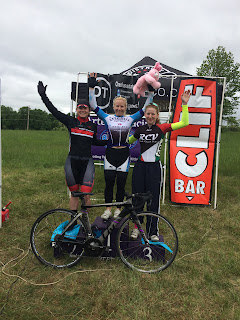 Bunny Hop Criterium Women's 3/4
There aren't many 3/4 races now that there's a women's 5 field. I took the opportunity to double up and try to pip another upgrade point or two. The 3/4 race had only 6 women, with a few apparently scared off by the wind and the rain. My plan was to sit in and do as little work as possible, since I already had one race in my legs. Sticky Fingers had two racers, but everyone else was there as a single; no teammates to work for us!

As a result, the pace was really slow. No one wanted to burn matches on the front to keep it high. On the first preme lap, no one even bothered sprinting; the woman on the front of the bunch accelerated slightly and no one tried to come around her. She took the preme comfortably.

I didn't have high hopes for winning the race, so I took a gamble on the next preme lap and sprinted from the 200 m mark. No one else came with me, so instead of sitting up after the line I followed the advice of the crowd to "Keep! Going!" I had a massive gap! I drilled it for another lap then tried to settle into threshold. I don't think I'm very good at judging what that is, yet; I think I end up going too hard and running out of steam.

I stayed away for a few laps before an RCV rider bridged up to me from a gap of 7-ish seconds. I slowed down a little until she caught my wheel, then drilled it to pull away from the chase group again. Unfortunately, I drilled too hard, and couldn't catch her wheel when she pulled through. We both drifted back into the pack. I sat on the very back of the bunch and waited for a good opportunity.

The pace was still pretty slow on the last lap. I'd planned to attack after the chicane, where no one was pedaling because they were preparing for the next turn. There wasn't really room, though, because we were so spread out. So I stayed in the back and waited for someone else to jump. I'm not sure who jumped first, but I held back for a few extra seconds and then stood and accelerated, surfing wheels to come from 6th to 2nd. Podium number two for the day--a double double!

I enjoyed this race so much; I can't say enough good things about what a terrific crit Artemis Racing put on. I recommend it to everyone for next year!

Ride Sally Ride Women's 4/5
This was our big team race. We had 5 cat. 4s in the field and a solid race plan. The course is an office-park crit with three right-hand turns and two little stretches of elevation gain. It was cold and windy on Sunday, with a strong headwind after the first turn, a cross-headwind after the second turn, and a powerful headwind with a slight downhill on the finishing stretch.

We began attacking from the beginning, opening up gaps and forcing everyone else to chase. Every time they brought one of us back, another would attack. Meanwhile, our A rider was staying sheltered in the pack. I got in two good attacks, one of which prompted a bridge from a Rock Creek Velo rider. We traded turns for a long time before the pack brought us back.

On my second break, I was afraid I might actually stay away! As I came around with 10 to go and then 9 to go, spectators were shouting that my gap was growing and the pack wasn't working to bring me back! Besides the fact that it hurt a lot, it wasn't the plan for me to stay away! I was glad to see a teammate blow past me with 8 to go. I heard people shouting for me to grab her wheel, but I didn't have the strength and drifted back to the peloton.

Another teammate bridged up to the first, so we had two working together off the front. The three of us that remained stayed positioned to disrupt any chasing efforts, then came together with 4 laps to go. I confess I got a little excited and started ramping the pace up too soon, with 3 to go. Patience, Jamie! With 2 to go, our A rider was on my wheel, and I was on another teammate's wheel. She drilled the pace for a whole lap and started a second before pulling off. Our A rider shouted to me "GO! GO!" "Wait, what? Don't GO?!" I replied, because my ears had stopped working and my brain had turned to jelly. "GO! GO!" she said again, and so I did. I buried myself right up until the final turn, going as hard as I possibly could and shouting my body down when it asked to stop. I pulled wide out of the final turn and our A rider came past me with open road in front of her. She took the bunch sprint to complete a clean sweep of the podium for Veloworks-Spokes Etc. 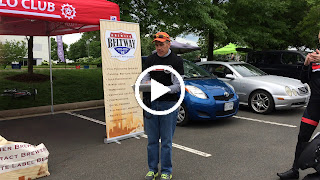 As fun as it was to stand on the podium and win some premes, I had an even better time working together with my team. We executed our race plan to the tee and brought home a great result. I ended up in 7th, and my other teammate in 11th, but really we won the race. It was a marvelous team victory, some of the most fun I've ever had on the bike. I'm so grateful to be part of an awesome team!
Email ThisBlogThis!Share to TwitterShare to FacebookShare to Pinterest
Labels: cycling, race, race report, win