In which I get my confidence back 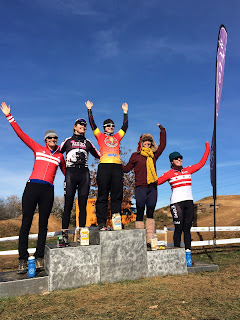 I raced all of the Super 8 (now the Super Series) races last year. But I only raced the Super 8 series races. I didn't do any of the Sportif Cup races. Most of the races in MABRA Land are associated with one of those two series. Since I only did Super 8 last year, there's a whole half of the races in the area that I'd never done! South Germantown CX was one of those.

The course was mostly open with a surprising amount of long, gradual uphill drags. The grass wasn't too thick and the ground wasn't too rough. There was one short, steep off-camber section, but most of the turns were really wide and designed for carrying speed. It was kind of a grass crit . . . which is absolutely perfect for me! It was also about 18° when I started pre-riding. The last race I did was a balmy 65°. This is the first race of the season where I've had to wear gloves. Those kinds of temperatures are bad but bearable, but they came on so suddenly that my body was not prepared.

This was my first time wearing the Sportif Cup leader's jersey, too. It's bright orange and hard to miss, but it entitles me to a front row starting position. I got the hole shot from the start and went off the front right away. For the first quarter of a lap or so, the field was strung out on my wheel. I tried to measure my effort and not go too deep too soon, but the first section of that course is all uphill! I always tell myself I'm going to sit in and let someone else set the pace, but then I end up on the front like a dummy anyway.

I'm not sure how or why I, but I managed to open a gap to the rest of the field. I went hard on the rest of that lap and increased my lead. By the end of the lap, I had a good gap to second place. The course was so open, though, that I could see the race developing behind me. I worked my way through the master's field, and caught one of the 1/2/3 women. My back and hips were cramping by the end of lap two (I've had cramping trouble in training all this week, I assume because it got so cold so suddenly). As a result, I was off and on the gas for the second half of the race. I could see second place behind me, and she steadily gained on me through the first half of the course. Then I would either pick it up on the second half, or the course just suited me better. Either way, starting each lap I could see that I'd grown my lead again. But every time I would think, "Okay, I can probably ease up a little," second place was right there to push me forward again. So I would ease up enough to relieve the cramping, then gun it again to maintain my lead.

Fortunately, my body didn't shut down so much that I had to stop entirely. I rode a clean race, too--not at all like Biketoberfest CX! I felt my rear wheel slipping slightly in a tacky turn on the last lap, but otherwise rode perfect. My two-week break from racing served me well. I feel refreshed. Excited to race. My confidence is restored.

And on that note . . . mid-way through this race, I started thinking that it's time to dip my toes into the 1/2/3 waters. I am still shy of the upgrade points needed to move from cat. 3 to cat. 2, although I'm getting close. And I'd still like to win the Sportif Cup Series in the cat. 3/4, if I can! But I think I will race up in the 1/2/3 for the next race (S'ville CX, if the promoter will let me) and see how it goes. I imagine that I will have my butt kicked, but that's probably a good thing.

Anyway, cross is fun and I like it. The people I get to race with are really cool. Even with no teammates around at this race, I still was among friends. That's a great feeling. We have a good thing going in the women's scene here in MABRA Land.
Email ThisBlogThis!Share to TwitterShare to FacebookShare to Pinterest
Labels: cycling, cyclocross, race, race report