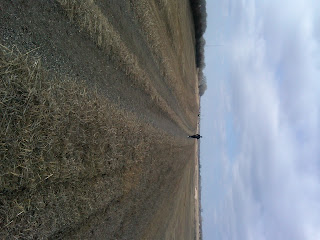 Note: This picture does not accurately convey the misery that is a 42 MPH headwind.
Well, the best I can say is that I'm not a wimp.

But looking back, I kind of wish I were.

Sunday morning, I woke up to the sound of the tree outside my bedroom scratching against the house. Mind you, this tree is not next to my window. No, this tree is next to a solid exterior wall that sits right next to my bed. When I can hear the wind whipping it around, it means it's indecently windy out there. Indecently, I say.

But since the Not 4 Wimps 10 miler is a trail run, I figured we'd be running in woods, protected from the wind for most of the race.

Yeah, not so much.

The course begins with a mile of pavement, mostly downhill, that leads down into some ATV trails that run along the Arkansas River. You run under a bridge (through sand), then back up onto the trails, which wind along for some miles through the woods (woods being a relative term here; it's still Kansas, after all). Turn around point for the 10k gives you a tough choice. If you decide to continue with the 10 mile, the course heads out (and up) onto a levee on the west side of the river. The levee is completely exposed on both sides, probably 15-20 ft above ground level. There are no trees. No windbreaks. No shelter. The course takes you directly north and west.

Did I mention that the wind was gusting from the NNW at about 40 MPH?

The course continues for about 1.5 miles like that, then you turn around and head back the way you came.

First off, the course starts downhill, and I probably went out too hard. I was running with a group from my gym, not really paying attention to speed. I was running comfortably, so I figured I'd be fine. I got dropped by the main group (this is not the kind of race that casual runners do, so it's not like there's a big group of 12-minute-milers for me to pass), but I was passing people, especially as we got into the technical sections--the sand, the winding trails, the up- and downhills.

It might have been the sand that really took me out of my comfort zone. I just tried to maintain a steady pace. Probably what I should have done was walk. About 5 minutes later, my stomach started to get really cranky. Really, really cranky. I've never cramped like that in a race, especially not at 2.5 miles into it. I was doubled over, holding my gut and wondering if I should just turn around and go back. I didn't, of course, but I got to see all the people I'd passed before as they blew by me.

I seriously re-adjusted my expectations, at this point. No longer was the goal to see how well I could do; now the goal was to see whether or not I could even make it through.

I got to the 10k turnaround/water stop, and seriously considered packing it in. It was not going to be a fun race, for me. Might as well throw in the towel, preserve what I could of my day, and head back early. But the name of the race is Not 4 Wimps, and damned if I was going to be a wimp about it.

Had I known where exactly the course was going, I may have chosen differently.

I have never run in winds like that. I've cycled in winds like that, but usually when the conditions are that bad, I just postpone a workout. It's not worth it to go out and have a crappy run just to say I got in my 10 miles for the day. So I would never willingly subject myself to the kind of suffering that I endured on that 1.5 mile stretch. There were times when I was moving my legs and not moving forward at all. Like running on a treadmill.

The real low point, though, was when I got a rock in my shoe and stopped to shake it out. The wind blew me over, and I realized suddenly (and painfully) that the levee is a prime spot for sand burrs. So I sat down to brush those off of my gloves and sock (so that I could put my shoe back on). But you know what? Sand burrs will also stick to your butt. I spent a good 5 minutes there trying to pull all of those damned stickers out of my hands, foot, and ass. Meanwhile, everyone passed me (including the cute girl I met before the race, who smiled and asked, "Did you fall?" as she breezed by me going the other direction).

The race got marginally better after the turnaround. Having a 40 MPH tailwind to push you along sure helps. But my gut still hurt like none other, and I still had to keep stopping to let the stomach cramps work their way out. Apologies to the few runners who were still behind me at that point. I know I was upwind from you. Sorry.

Stomach cramps got to be too much for me to bear somewhere between miles 7 and 8 (I think; my memory's kind of hazy). I started looking for a . . . secluded place. You know. Off the trail. Where no one could see me. Yes, I did. I had to. I felt a lot better afterwards. Dirty, though.

After my Alone Time, I felt able to run again, and finished the race relatively strong. Final time was 1:50:22 for an average pace of 11:02/mile. Pbthhhhh. That's what I think of my time. I mean, any time was probably great for this race, considering the course and the conditions. But I'm still not pleased with the way I performed, even factoring out the time spent picking sand burrs out of my body (still have splinters in my right middle finger, by the way) and (erm) squatting. It was a shitty run (and if you are a good person, you will ignore that pun).

In short, this was the worst race I've ever done (only thing worse was when Shawnee Mission got rained out last year, but I don't think that counts). And if wimpiness = whinyness, then I am the biggest wimp ever.
Email ThisBlogThis!Share to TwitterShare to FacebookShare to Pinterest
Labels: bad day, race, race report, run