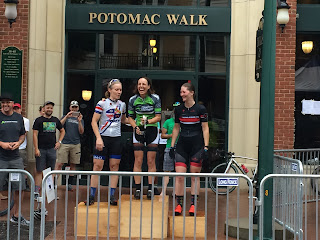 I just got back from a long weekend of racing. It'll make for a long read if I write it up all at once, so I'm submitting it to you in chunks. Chunk #1 is for Friday night, the kick-off crit in Hagerstown, MD.

I'm fortunate to have a job where I can take off at noon on a Friday to go race, so I left mid-afternoon to get on the road to Hagerstown before the traffic apocalypse that is Friday night in the suburbs of D.C. Even so, the drive took twice as long as usual. I was grumpy and out-of-sorts by the time I got to the cheap hotel I'd booked for the weekend. Also, one of the cats peed on my duffel bag, so I had that pleasing aroma to keep me company on the drive up. Add to that the fact that Emily had to stay home because of an appointment she had on Saturday, and I was having a day.

There was rain in the forecast. The sky was gray as I parked in downtown Hagerstown and got my numbers from registration. By the time I kitted up and started riding the course to warm up, it was sprinkling.

This was a women's open field and their regional championship crit, so I felt in over my head. I was there mostly to support a teammate, and I needed to keep my powder dry for the weekend and not crash. Tour of Washington County was my A race for the season, but the kick-off crit didn't contribute to the GC; it was just for fun. I told my teammate, who wouldn't mind having the championship jersey, that I would be there for her in the end if I could. We made tentative plans, then lined up for the start.

It was legit raining by then. The oil and grime was welling up on the roads. The corners were slick. I stayed near the back of the bunch, which was fast in the straights and ginger in the corners. Five corners, one more of a chicane, with a short, punchy hill on the back side made up the course. There were zebra crossings (stripes of white paint) and bricks on the corners. It only took one lap for someone's rear wheel to slide out on the chicane. Three or four women went down. I barely avoided a downed bike and hopped onto the sidewalk to get around the crash. It took a lap or two to chase back on, but I made it after 2 laps.

The pace was manageable for me, so I moved up into the top 10 wheels after getting settled. I followed an attack by a Charlottesville rider, then took the inside line on the chicane (which no one else took for the whole race, for some reason) to go off on my own. I didn't have any ambitions of staying away, but I wanted to get one tough effort into my legs for the next day's road race. I stayed away for about a lap, then tagged on to the back of the group as they caught me.

It was raining steadily, and the corners were treacherous. About halfway through the race, a rider from Baltimore Bicycling Club went down in front of me and I slid out trying to avoid her. One other woman went down and another dropped her chain trying to avoid us. No one was hurt, and no bikes were hurt. I'd torn my skinsuit, though, and all I could think to say was, "Aw man! This thing was $180!" In retrospect, I wish I would have said, "You guys okay? Let's go to the pits for our free lap!" The other three took off and I followed at a much slower pace. My brake levers were twisted in so much that I couldn't prop myself up on them. I stopped in the pit to have my brake levers fixed and because I could, but the other three were trying to chase back on. I assumed they didn't want to take the risk of being in the pack, but one of the women later told me she didn't realize she could go to the pit for a free lap. So again, I wish I would have said something about it instead of complaining about skinsuit damage.

I got a push from the mechanic and got back in with the main pack, now down to 10 riders. I had no trouble matching their pace, but I was skittish in the corners and kept getting gapped. The bell rung, the race announcer shouted, "$10 prime!" and I though, "I don't want to crash and die for $10!" The pace hotted up a little, I was still getting gapped in every corner and surging to catch back on, and eventually I said, "Screw this, I have to race hard all weekend" and dropped myself off the back. After two or three laps on my own, I got the hang of the corners and was able to take them at speed, but I don't regret dropping out of the group. One of the more experienced racers, a woman I respect very much, pulled off to the side and DNFed after the first crash. She has little kids. She didn't want to risk a dangerous crash like what had just happened. I respect that very much. It was safer for me and for everyone else around me to drop back and finish the race on my own terms.

I did several more laps on my own. Eventually, on the finishing stretch, I looked around to see the pace car turning the final corner just as I went through the start/finish line. I knew that would probably be my last lap. I got pulled on the next lap; I think there were 2 or 3 to go at that point. Two women got a gap in the final prime lap, probably just before I got pulled, and held it to take first and second. My teammate attacked into the final corner and held her sprint all the way for third place.

There was one woman from NCVC who was taken out on a stretcher after that first crash. Fortunately, she was discharged from the hospital that evening and went on to win second in the women's open GC for the weekend. All of the women made it out of that race safely, but there were a few of us who left with a little less skin!

Tune in tomorrow for the next exciting installment in my Tour of Washington County weekend!
Email ThisBlogThis!Share to TwitterShare to FacebookShare to Pinterest
Labels: cycling, race, race report, stage race