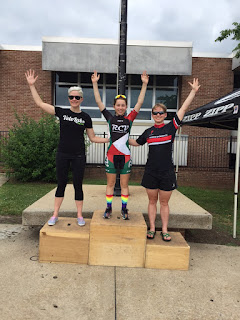 Since the women's road race didn't start until 10:30, I had the chance to sleep in a little on Saturday morning. My body woke up at 6:30 anyway, though, after a restless night of sleep. I took advantage of the hotel breakfast before packing up and heading to the Smithsburg High School for staging. I warmed up very briefly by riding around the parking lot a few times before lining up with one teammate for the start. The cat 4/5 men went off 5 minutes ahead of us, a decision that several of us women questioned; we were pretty sure that our race would be neutralized when the men inevitably caught and passed us. Somebody said something to the effect of, "You're the 1/2/3 women! Surely you can hold off the 4/5 men!" Uh, yeah. Sure.

This road race course is moderately rolling throughout, with three short but steep kickers at the end of each lap. Those three hills are probably the deciding factor of this race. The rest of the course is a cinch, comparatively, although the pace picked up on the first, third, and fifth laps for the sprint points competition. A series of attacks strung out the group going into the first intermediate sprint. My legs were already a little tired going into the finishing hills for the first time. I got dropped and figured that was all I would see of the pack for the rest of the race. I was very overheated, to the point of wanting to pull over and vomit. I unzipped my jersey all the way and tried to settle into a hard but manageable pace.

Then, naturally, our race had to be neutralized so the 4/5 men's race could come past us. I'd worked myself back within sight of the neutral support vehicle, but the neutralization is what allowed me to catch back on (I probably would have stayed off the back if not for that). It took a surprisingly long time for the men to get past us. I stayed way in the back of the group, following the lead of some more experienced women. I had no problem staying with that group until the second time up the finishing hills, when I got dropped again.

I worked hard to try to catch back on, though, and was able to tag on with a group of stronger, more experienced riders. A pair of women from Haymarket and one from Vanderkitten and I worked together (although it was mostly one rider from Haymarket) to get all the way back to the pack. I stayed in the lead group again until the third time through the hills, when I fell off for the final time.

Fortunately, I found a few other riders to work with, and a group of 2 to 6 of us worked together for the final 2 laps. We took turns pulling, although we never established much of a rhythm. I was half-hoping that we would get pulled after 4 laps, but instead we got the bell. We stayed together for the final lap, sweeping up a few more riders along the way, until the last time up the hill. On the final climbs, my right quad cramped so much that I couldn't pedal with my right leg at all. So I pedaled one-legged up the hill, shook out my right leg on the downhill, and that gave me enough relief to make it up the final two hills. The group I had been with rode away from me, including one other woman in the cat. 4/5 race. Since I couldn't pedal hard, I took the opportunity to eat the rest of my food and drink the rest of my water to start the recovery process for the next day's races. I made it up the final hill in a little over 2 hours, a few minutes back in the GC from first place and just seconds behind second place.

I'm proud of myself for doing well in this race. I don't think this course suits me; it's too hot and too hilly. In retrospect, I wish I would have used different gearing, too. I had a wheel with an 11-28 cassette on it in my car, but used the wheels with the 12-25 instead because they're a little lighter. I think having the bigger cassette would have been more helpful than a slightly lighter wheelset. Still, I managed a respectable third place in the 4/5 field, and gave myself a good start in the GC competition going into the weekend.

One of my goals for this year was to get better acquainted with my strengths and weaknesses. I trained steady-state for so long as a triathlete that it was the only real strength I had coming into bike racing. Now I'm starting to develop more of a sense of what I'm good at, as a cyclist. Hot and hilly road races ain't it, though! Criteriums, on the other hand . . . well, that's what I'll talk about in tomorrow's installment.
Email ThisBlogThis!Share to TwitterShare to FacebookShare to Pinterest
Labels: cycling, race, race report, road race