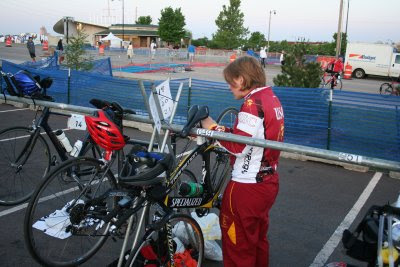 See that? That's my baby. That's what I have instead of a girlfriend.

This race was awesome.

Pre-race
My parents came along with me on this one. At the last triathlons races we attended as a family, we were late. Really late. No-chance-to-warm-up kind of late. So I insisted that we leave no later than 5:30 for a race that started at 7:30. Woke up at 5, and we were out the door by 5:30. Awesome.

Pre-race activities included picking up timing chip and swim cap, along with body marking. Transition area was tiny--there were only about 225 athletes racing the age group race. Pre-race rituals progressed as they should, except for a few little hang-ups. I had a great run warm-up, but when I tried to go out for a bike warm-up, the Gatekeeper stopped me at the bike in/out timing mats and asked if I had already racked my bike. "Um, yeah . . ." Apparently, once you racked your bike it had to stay racked. I've never encountered that rule before. Anyone have any idea as to what the point is?

Also, ran out of time for a swim warm-up, because there was a mandatory (pointless) pre-race meeting. Interesting tidbit, though--there were somewhere in the range of 30 USAT officials at this race, I assume because of the elite and junior elite races the day before. This is the first race where I've actually seen penalties in the results, I think. 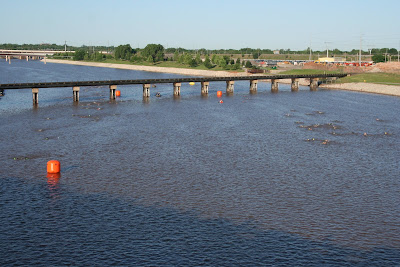 The swim took us under a bridge AND a railroad trestle!

Swim: 1500 m, 33:14 (32:18 unofficial, 2:01/100 yd)
Oh man that river was dirty. Not as dirty as Lake Afton (of the infamous Mudwater!), but pretty damn close. It was dirty enough that I'd watched the pros come out of the water the day before with what looked like a reddish-brown 5 o'clock shadow. Apparently, the North Canadian River contains a good amount of silt in the Oklahoma City area. Interesting.

Actually, even with the mud, the swim wasn't at all bad. The water didn't have that muddy smell/taste that truly dirty lakes have, and didn't taste bad when I inevitably swallowed some of it. And I still haven't gotten sick, so woohoo!

The swim felt almost effortless. I'd been a little worried about it, since last Monday was my first open water swim after a long winter off and it hadn't gone very well. Actually, I was an absolute mess. But Saturday, everything seemed to come right back to me. I didn't push myself overly hard, and I lost sight of the lead pack pretty early on. But the wave behind me didn't catch up to me, for the most part, and I did manage to catch a few of the men from the wave immediately before us. I remember while swimming thinking about how confident I was, how smooth and capable I felt, and how I needed to include that in my race report.

But now that I've seen the results--seen that my swim ranked 25 out of 42--I'm a little disappointed. I feel like I should be swimming better than this; I should be able to go around 28 minutes for a 1500 at this point, and should certainly rank in the better half of the pack for the swim. Honestly, I feel like I'm moving backwards with my swim. But that's a topic for another post. I'll just say that I was happy and feeling good, coming out of the water.

Oh! And there were wetsuit strippers! I have never been at a race that's had wetsuit strippers before! They were literally right at the swim exit, which didn't give me time to unzip my wetsuit and wriggle my arms free, so it was unnecessarily time-consuming; I could have done it faster myself in transition. I think that's what added the extra minute to my official swim time. 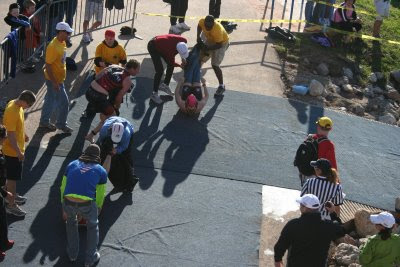 Way to get the most flattering shot of me, Dad.

T1: 48 seconds
Fourth best in the field. Only three women faster than me through T1, and one of them is an elite. 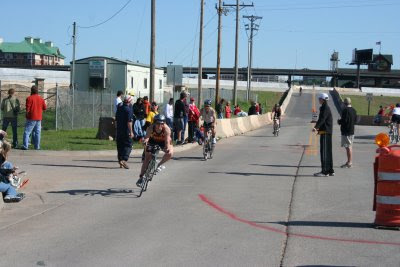 "Grr! Get that turn!"
Bike: 40 km, 1:17:59 (19.1 MPH)
The hardest part of this section (besides the shitty pavement) was keeping my effort level in check. It was a four-lap out-and-back course. I went out hard on the first lap, just to get things going, then sent my heart rate into the red zone on the second lap trying to pass someone on an uphill. Got past her, got up the hill, and had no zoom. I was going 15 MPH in the flats. At that point, I realized that I really needed to back off for the next two laps. Lap four, maybe I could drop the hammer (but just a little hammer).

The course was scenic, but not a ton of fun. The road was poor--the first portion coming away from transition was under construction. I wrote a review of the course, so if you want to hear all about it, you can go to Racevine.com and read all about it.

I worked hard on the bike, and felt I put forth a good effort. I worked hard, but kept my heart rate and breathing under control. I did well with handling, executing the corners at either end of the course well at a decent speed. But again, looking at the results, I feel like I should be doing better; I should be around 21 MPH, at this point, not 19. 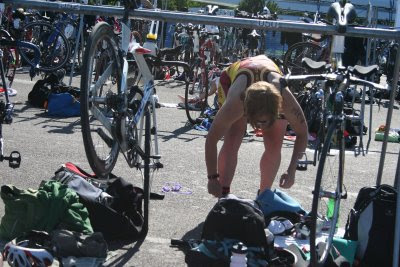 T2: 53 seconds
I forgot all about taking my feet out of my shoes at the end of the bike course, so this was a little slow. Also, trying to jog in road shoes really sucks ass. 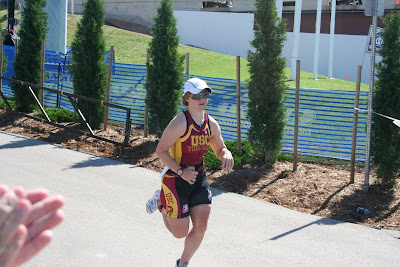 That is not a tan; that is mud.
Run: 10 km, 57:38 (9:16/mile)
This was really the proudest part of my day. I nailed this run like I've never nailed an Olympic-distance run before. Although I suppose that's not a huge deal, considering this is only my third race at the distance.

Once again, the course consisted of four out-and-back loops, which made it unbelievably easy. On the first loop, I could think already about how nice it would feel to be on that next loop, and before I knew it, I was on the second loop! And 2.5 km is not very far to run--that's like a mile and a half! So the out-and-back went really quickly.

It was interesting to see all the different people on the run. Pretty much everyone was on the run course at the same time. I passed the fastest racer, and I passed the slowest racer--you saw everyone, at some point. And it was pretty cool to run past the spectators and have them cheering at so many points on the course. Really, the feel of the ITU style course was just so different!

The support was unbeatable--two aid stations on each loop, for a total of eight aid stations total. The volunteers were great, very helpful and encouraging. And there were USAT officials positioned at crucial points on the course to make certain you didn't run the wrong way.

I had enough left for an awesome kick at the end, had my name announced, had people yelling and screaming for me, and I saw my name on the Jumbotron after I crossed the line. It was pretty cool. And the post-race food was the best I've ever seen! 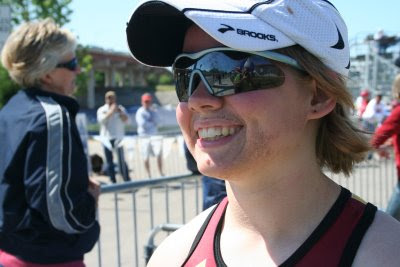 Silt + Powerade + 3 hours of racing = instant beard! Don't worry; I've shaved since this was taken.
Total: 2:50:30
This is a 25-minute PR for me, and I met my big goal of breaking three hours. I am completely happy with my performance. I know I pushed it, I know I gave all I had on the day, and I can see how drastically I've improved (also, I didn't repeat the fueling mistakes of Wildflower).

So hurray for me! And on to the next thing.
Email ThisBlogThis!Share to TwitterShare to FacebookShare to Pinterest
Labels: improvement, purpose, race, race report