Race Report: Overview of the Omnium 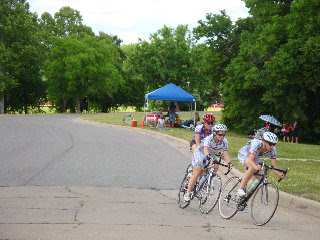 All three of us--Shannon, OK Girl, and myself--at Sunday's criterium.
So I've done a bike race.

I wasn't very good at it. I don't like not being good at things. It tends to inspire me to push myself harder and harder until I become better at them (mediocre, at the very least). That's what I've done with triathlon.

This weekend was definitely a learning experience, in a variety of ways:
And there are lots of things I'm trying to keep in mind to silence the "You suck!" voices. There were only three women in the field, so there's no telling how I'd stack up against a field of, say, 30. At my second cyclo-cross race, I ended up right in the middle of the pack, and that might be where I would finish in a bigger race (instead of at the very bottom). My training has focused heavily on running this year, and I've seen my biking and swimming improving at a much slower pace than I saw last year. I haven't been training for this, and if I start, I'll probably be better able to hang with the big girls.

A little more about my training: I really felt for the first time how much difference this year has made in terms of preparation. I have always had the top end speed above everything else, even though I couldn't hold it for very long. But this year I haven't worked at all on developing that, and I can really tell. I never thought I would lose that (and I should know better), but it's not currently there. Which isn't to say it's gone forever, of course. But it won't come back until I work on it.

But I did make enough money to cover my entry fees, plus a little bit extra. And I won a little bit of gear from the prime yesterday. Small field=payouts for everyone! Whee!


So lots to work on. I'm hoping that I can do another stage race towards the end of the summer/beginning of the fall so I can see how I stack up against more women and myself.