The time trial did not go off as I expected, certainly not as I wanted. I'm a triathlete. I should own time trials, man. But I did not own this one.

There were two other women in the TT (only one was a repeat from yesterday). I was the first woman to leave, with one a minute back and the other two minutes back.

Very disappointing. It completely bummed me out, actually. All the negative self-talk of Saturday came back. I'm not a cyclist. I'm not strong. I don't belong here. I'm no good. I suck.

I went home and ate lunch, then switched out bikes and headed to Riverside for the criterium, which I decided to do after all (since the worst I could get was third place). 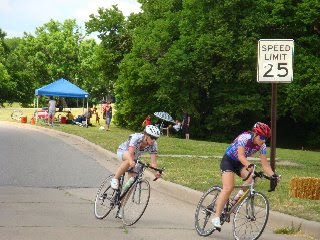 Notice that I am nowhere to be found, in this photo.

The crit was a new experience for me, and one I was pretty nervous about. I would describe my handling skills as decent, but I wasn't sure how well I would react to serious, aggressive pack riding.

Turns out I needn't have worried, because there were only three of us (back to the original three from Saturday), and they decided against combing us with the Cat 5 men because someone said she wasn't comfortable with pack riding.

So it's the three of us--me, Shannon (a Specs teammate), and a girl from Oklahoma--on this .8 mile course, 15 laps for the race with two prime laps. Shannon and I warmed up together, talking over tactics. We determined there was no reason we shouldn't take first and second, seeing as how there were two of us and only one of her. So we planned to keep her out in front, let her set the pace and do most of the work. Then we'd jump at the end and try to drop her.

The course wasn't too challenging. All of the turns were nice and wide, and there were no hills (although there were a few slight gradients). However, there was a section that was paved in brick--cobblestones! Two of the corner marshalls suggested that we try to attack there, since most of the other riders seemed not to like it too much.

We rolled up to the line, had roll call (for all three of us), and once again had the unauspicious beginning of rolling off to the casually-spoken word "go." Shannon set off at a brisk pace, I jumped on her wheel, and OK Girl brought up the rear. We spent most of the first two laps drifting back to let OK Girl take the lead, which she eventually did. Around lap 4, Shannon let on that we should do at least some of the work (although I disagree; if she wants to do everything, I'll let her), so I passed OK Girl to take a pull. I finished the lap, then drifted off the side for rest.

Unfortunately, I had chosen to drop off the front at the beginning of the prime lap, and the other two took off like rockets. I wasn't prepared for that; I wasn't expecting that (of course, I'm not sure I could have hung with them even if I knew it was going to happen). I got my ass dropped.

Shannon took the first prime, and I spent the next 4 or so laps trying to catch them again. I hopped back onto the end, with OK Girl in the lead and Shannon sitting on her wheel. I had just enough time to catch my breath by drafting through that lap before the bell rang again for the prime, and we were off again. This time, I managed to stick with Shannon as she pulled ahead. OK Girl caught my wheel, but we were hammering, and at least I wasn't watching them disappear into the distance this time.

About three-quarters of the way through that lap, Shannon got tired and asked me, "You got it?" I shot off past her like a rocket, and that lasted for about 20 seconds before I fell back, exhausted. They both passed me, with Shannon in the lead. But I pulled just long enough for Shannon to rest and outsprint OK Girl for the prime.

After that prime, it only took me about half a lap to catch them up again. And we sat in, letting OK Girl lead. I snuck up to Shannon's side and tried to discreetly discuss strategy. I told her that I probably didn't have much more than 15-20 seconds of power in my legs, so it would be better if we could drop her with one colossal effort, rather than gradually ratcheting up the speed. In retrospect, it actually would have been better if I could have tried to outsprint her, but I might not have won that contest either.

We decided to try to drop her at the beginning of the 14th lap, right at the cobblestones. OK Girl led us over the line, then Shannon and I jumped, accelerated, and tried to outrun her. Sure enough, about 20 seconds later, my legs decided they had had enough. They gave me the finger, locked up (literally, cramped up tight as rocks), and deposited me back on my seat to do my best to hammer down on the pedals and watch OK Girl pass me in pursuit of Shannon.

They gained about half a lap on me through that lap and the next one, but Shannon managed to outsprint her at the end. So at least the team brought home the win. I gave it all I had, and managed to finish only about 5 seconds back from those two.

The result was the same as Saturday, and in this race, OK Girl was still just so much stronger than me. She's like a freakin' ox. Strong as a horse, that one. But I felt much better after the crit than I did after the TT. I'm not sure why. I think I just really like the criterium format. That's probably why I enjoyed cyclo-cross so much, too. And I was happy to get to work with a teammate, and work well together. We could have executed better in terms of strategy, but considering that it was our first time really riding together, I can't imagine it going any more smoothly than it did.

Most importantly, none of my fears about criterium racing came true. I executed every corner without trouble, I bumped wheels (both from the back and from the side) a couple times, and didn't have any problem. I just stayed relaxed and comfortable, like Nicole Freedman taught us, and had no trouble at all.

Of course, the handling isn't enough, and I need to work on my power output, but I'll talk about that more in my next post, when I review the entire Omnium experience.
Email ThisBlogThis!Share to TwitterShare to FacebookShare to Pinterest
Labels: bike, cycling, race, race report