I did my first marathon! It hurt. It was much harder than I expected, much more painful than a half distance triathlon or anything else I've tried. But I also recovered much faster than I expected, based on the duration of the event.

Pre-race
My roommate and I headed to Virginia Beach at around noon on Saturday. Between bad traffic and stops for peeing and snacks, the 3 hour drive took us almost 6 hours. And then when we got to Virginia Beach, we had mapped the wrong convention center location (the convention and tourism office instead of the actual convention center). By this point, I only had 45 minutes left to pick up my racing packet, so I was super stressed. After that, we had to drive up and down the main drag in Virginia Beach looking for my hotel. I couldn't find my confirmation e-mail for my hotel, but I had in my mind it was a Days Inn that I was staying at. I was wrong. We went to both Days Inn locations on the beach, and I wasn't booked at either one. I finally found my confirmation email, and realized that I was actually booked at a Best Western. So then, of course, we went to the wrong Best Western. We finally got to our hotel--and keep in mind that we've driven up and down Atlantic Avenue 3 times at this point, and each 1-mile trip was taking 10-15 minutes, so we'd been fighting through the ridiculousness for an hour--and we were greeted by this view: I needed a nap and a butt-load of water at that point, though.

My parents arrived shortly after we did, and we settled into our room. Once we figured out the sleeping arrangements, we headed to a popular Italian spot for dinner.

Day-of
I woke up at 5:30 (3 hours before race start) to try and get my breakfast in. I brought a huge bowl of steel-cut oatmeal with protein powder, coconut oil, and raspberry jam. I ate most of the oatmeal, but 2 cups of steel-cut oats is a lot. I figure I ended up with about 500 calories for breakfast. 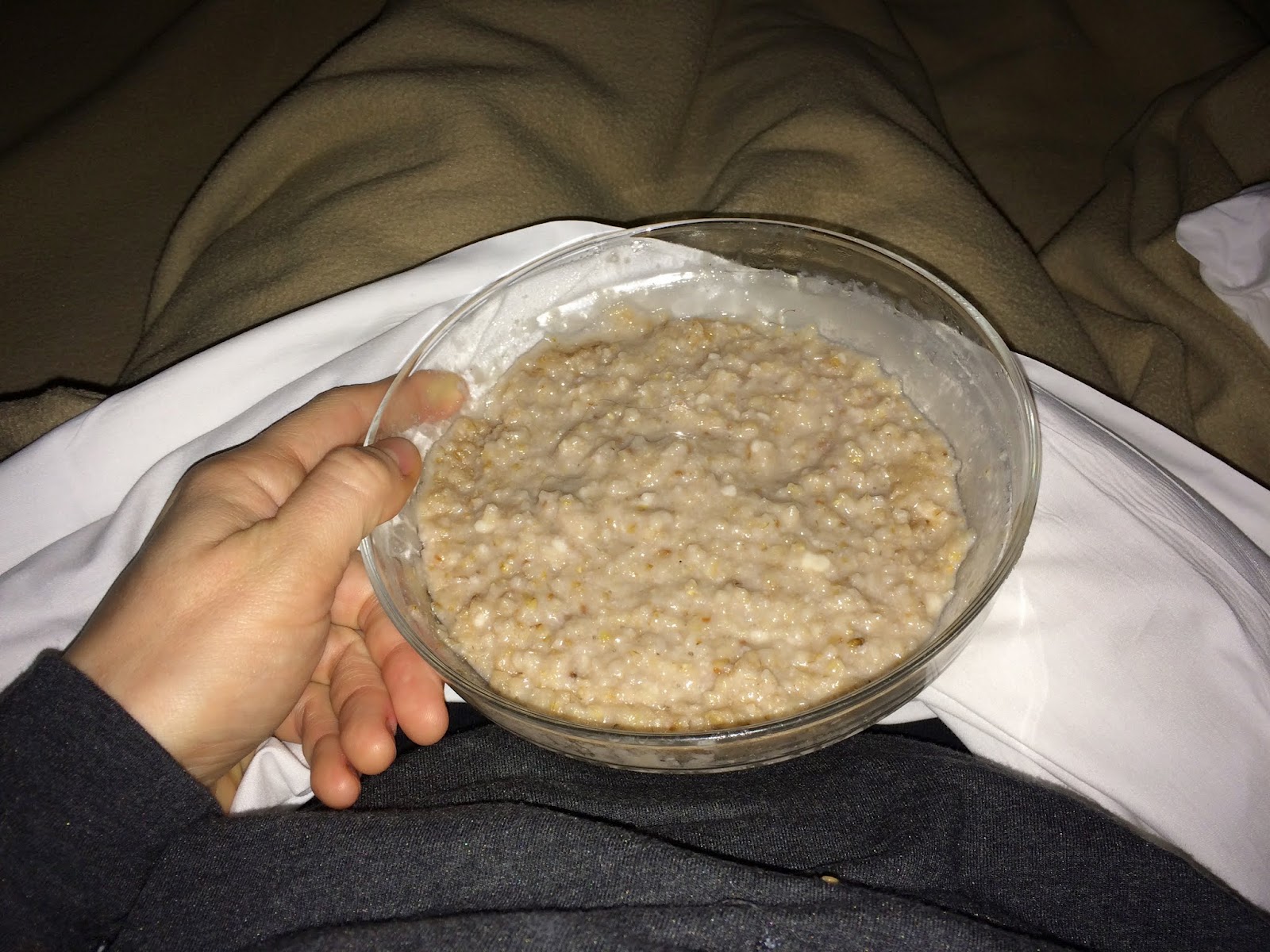 After breakfast, I tried to go back to sleep, but I was too excited. I ended up staying up and watching the weather channel. My dad got up and around sometime after 7 to keep me company, and we took off for the the start line (a little over a mile away) around 7:45. 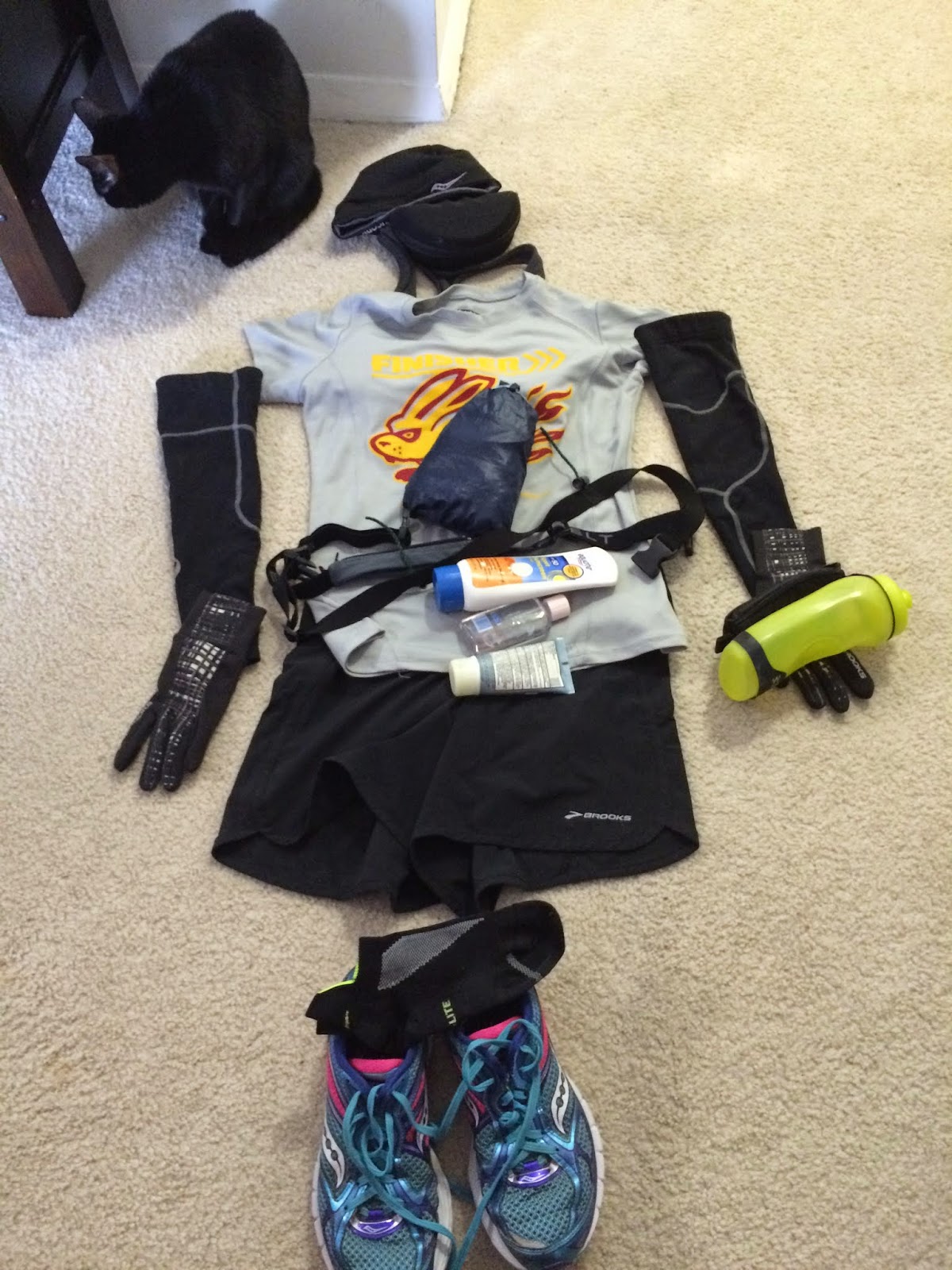 It was chilly before the race, but I was kitted up in sweat pants and a jacket. I chose to wear my favorite running shorts with a short-sleeve shirt, arm warmers, gloves, and a thermal cap. The only thing I didn't keep for the whole race was the gloves, because there was a cool breeze, and I kept having to put my arm warmers and cap back on. 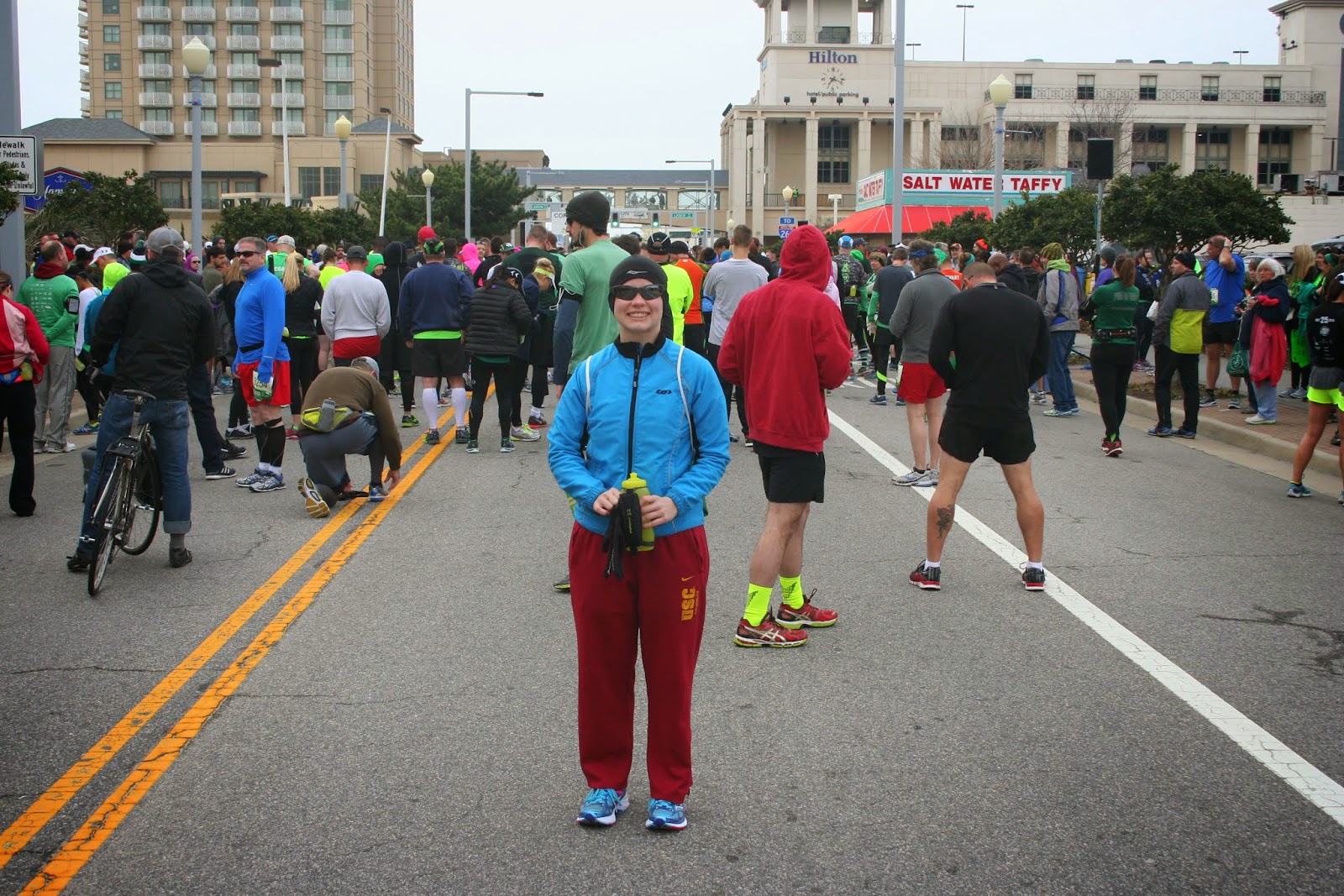 The course was great. Flat as a pancake, with some really interesting sights. We got to run through Camp Pendleton, and a great group of soldiers were cheering us on as we ran through. There was a long, boring stretch from mile 13 to mile 19, where we got onto Fort Story, but it was still very pretty. And Fort Story was kind of a drag; the roads were bad, and the only spectators to speak of were armed guards. Still, much better than running on McConnell Airforce Base in my first half marathon! 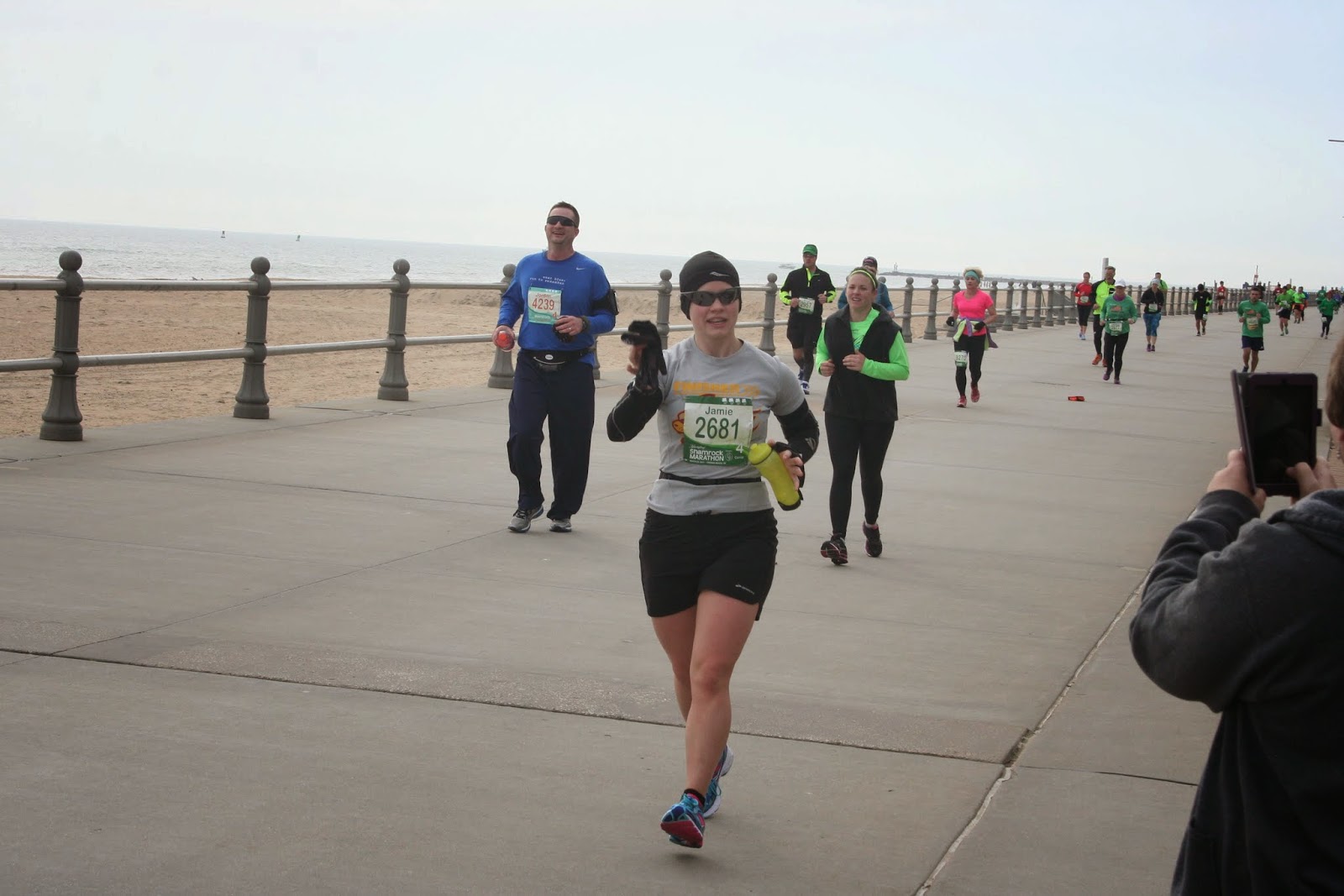 I felt good through the halfway point. My sartorius often bothers me on really long runs; I get a sharp muscle pain at the tendon, right up at the attachment near my hip. It feels like the tendon is trying to pull away from the bone every time I lift my leg. It started bothering me around mile 14, worked itself out after a few miles, but came back in the last 10k.

At halfway, I tried to pick up the pace a little bit, which I think was a mistake. I should have stayed steady until the last 3-4 miles. I had a very rough time from around mile 17 to . . . until the end of the race, actually. Maybe if I'd kept it slow at mile 14, I would have felt stronger throughout the second half. I did well with my nutrition plan. I took a gel or chews every 30 minutes, drank Gatorade and water at every water stop, and drank from the water bottle I was carrying every 5 minutes. I never got stomach upset, although I did have a little bit of cramping in the second half; it went away when I had Gatorade. I think in the future, I will carry Nuun instead of water, and only drink electrolytes. I've been doing some reading on isotonic fluid replacement, so I may see if I can get more scientific with that. I've also never done a sweat test (where you weigh yourself before and after a hard workout to see how much sweat you lost), and that might be helpful before my next big race. Taken as a whole, though, I was very happy with how my nutrition plan worked for me. I'm glad I practiced it in my training.

I'm not very happy with my pacing. I was able to restrain myself early in the race, but my plan to pick up my pace in the second half was not wise. Now that I've done a marathon, I think I'll be able to develop a better race plan and pace more consistently. I was counting on a negative split, but a better strategy would have been to keep things easy until the last 10k, or even later.

I experienced virtually no chafing, though I did stop at about the 17 mile point to put some lube on my little toes. But I had no blisters on my feet at the end of the race, no raw spots that surprised me during my first post-race shower. Normally I get chafing under my arms and in my . . . personal area. Aquafor and chamois cream, and lots of practice on where and how much to apply, served me well. 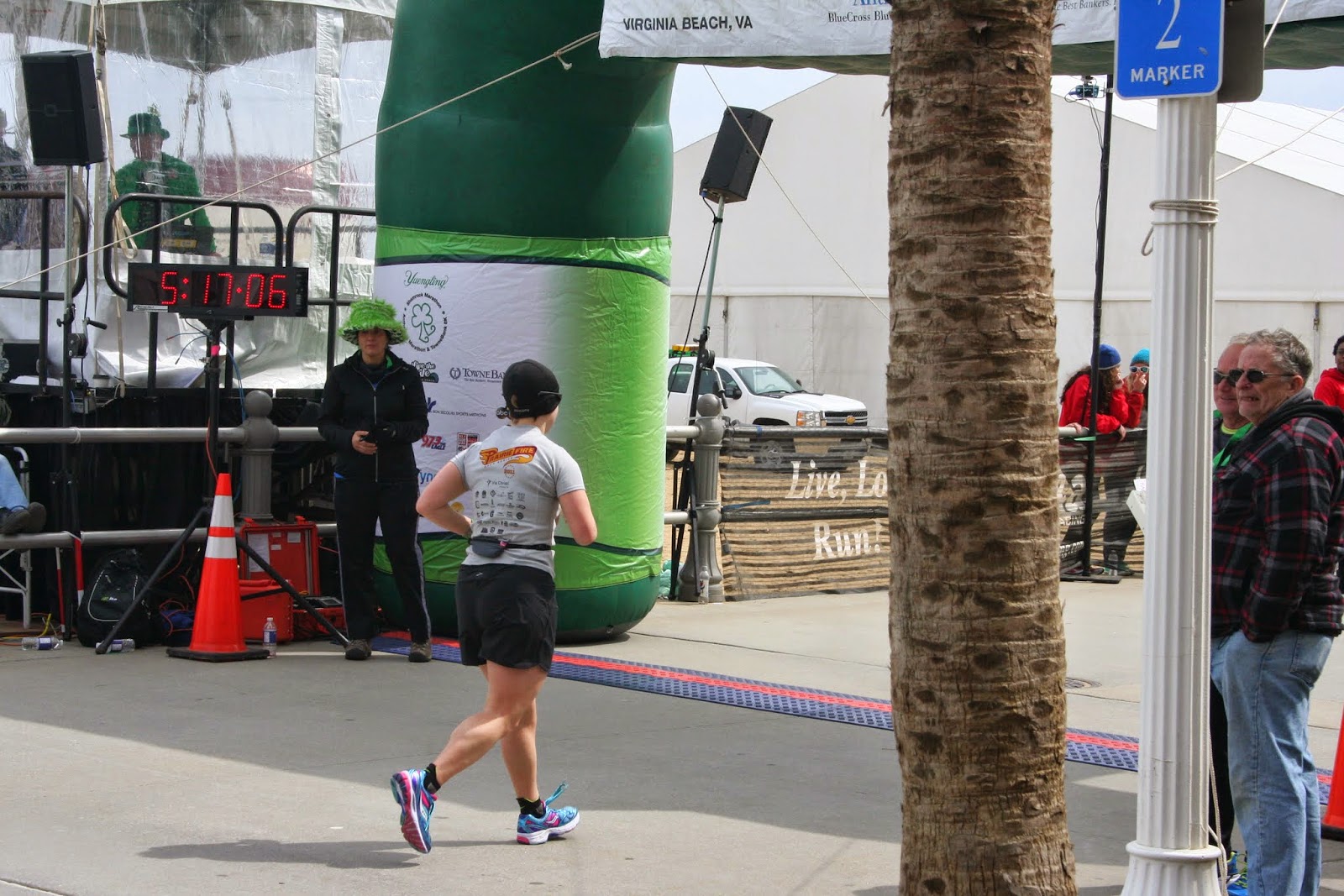 The most surprising thing to me was how much muscular pain I experienced. My back and legs seized up so much by the end that I could barely hobble across the finish line; I literally could not lift my feet more than a few inches off the ground. I'm not sure why that happened, but I assume it was a lack of overall strength. I know it's a little crazy at the paces that I run, but I think I would feel much more confident with a few 26-mile or longer training runs leading up to a marathon. Around 16-18 miles is where the wheels started coming off for me, and I did a lot of runs at those distances. My theory is that I built up a resistance to that point in training, and if I want to feel good throughout the race I'll need to do some 26-milers. 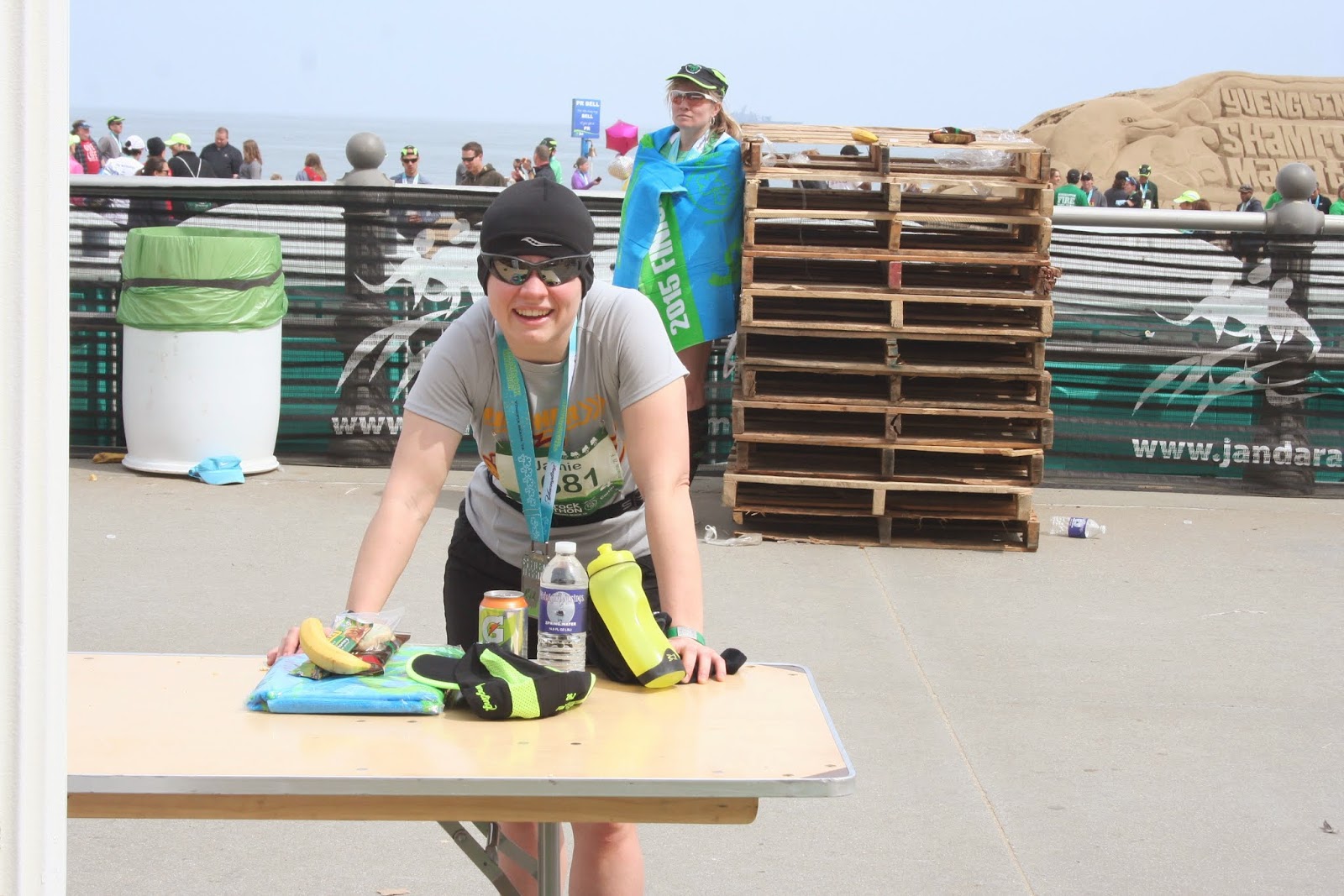 I'm also surprised by how quickly I recovered. I had a hard time with stairs on Monday and Tuesday, but by Wednesday I felt like I'd just come off a week of recovery: snappy legs, no muscle soreness, I was rocking my commute! And I didn't get the horrible stomach upset that I often feel at the end of triathlons. So marathons are much worse during, but much better after.


I can't decide whether I'll do more marathons . . . For sure I won't do one again until after my Ironman in September, but I'm not sure if I ever want to do that again. I said the same thing after my first triathlon, though; I imagine that the challenge of figuring out the training and racing puzzle will draw me back eventually.

Tomorrow I run my first marathon in Virginia Beach.

I've been slightly nervous all week. I haven't felt this nervous before an event in years. It's nice; feels like a challenge again! I go into it thinking, What if I can't do this? I don't really believe that I'll try and fail; I recognize that I'm pushing the limits of what I've done before, and it's possible that I might not be able to do it. Can I run 26.2 miles? I don't know! I've prepared well, but there's still a thrilling niggle of doubt.

So cheers to chasing the unknown! I'm off to Virginia Beach to pick up my race packet!
1 comment:
Email ThisBlogThis!Share to TwitterShare to FacebookShare to Pinterest
Labels: focus, marathon, race

Look what I got!

Technically, this is a reward for finishing my marathon, which I haven't finished yet.

So hopefully I don't totally poop out on Sunday, because I'm pretty sure that Tri360 won't take it back!
1 comment:
Email ThisBlogThis!Share to TwitterShare to FacebookShare to Pinterest
Labels: bike, goals, marathon
Newer Posts Older Posts Home
Subscribe to: Posts (Atom)