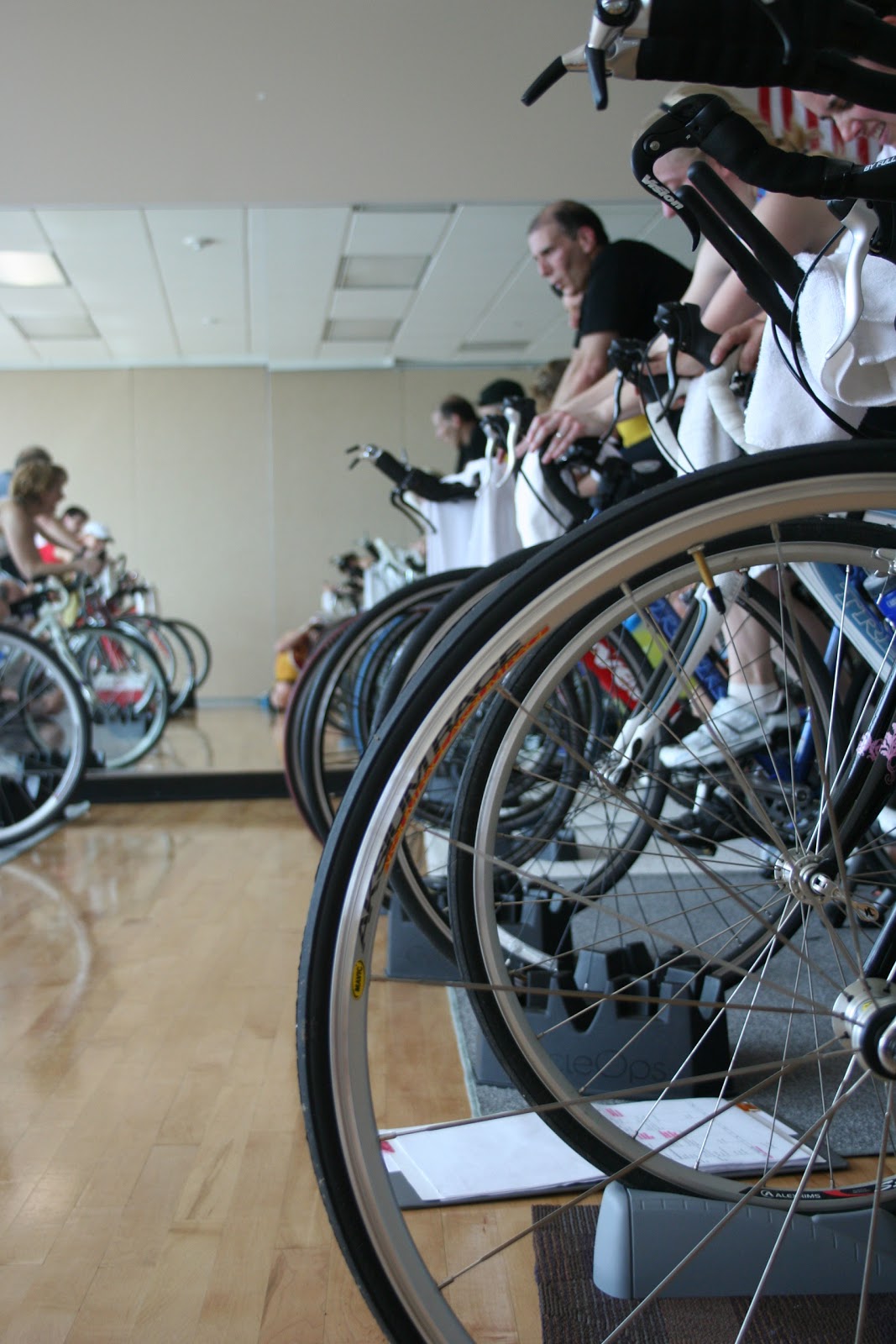 I put this workout together for a Springsteen fan, so it has plenty of music by The Boss. The workout profile follows the same pattern I use for a standard spin class. It gives you a good, high-intensity workout with plenty of variety.

I got sick. I think I've been working too hard, and too much. The stress made me susceptible to sickness. And now I'm sick, unable to workout! Currently, I'm on my second day of sick leave from both jobs, and my third day of missed workouts. Hopefully, I'll be well enough to go back to work tomorrow, but I'll probably take my training easy for a few more days.

So boo. Stupid sick.
No comments:
Email ThisBlogThis!Share to TwitterShare to FacebookShare to Pinterest

Hurray for recovery! I feel much better after a week of relative rest.

This week, I began incorporating higher-intensity intervals, like short hill climbs, track speedwork, and fast 25s in the pool. I've never experienced such a dialed-in training plan; I feel like every interval workout challenges me the perfect amount--the first half are easy, the next quarter are tough, and the last few are almost unbearable. It's like I can feel my fitness increasing! I'm not sure if it's because I've got more room to improve, after two years of sporadic triathlon training, or if this is what it feels like to transition from the high-power, high-speed fitness that I associate with youth to the endurance peak in the mid- to late-thirties. I'm not even thirty yet, but I feel like my body is changing.

My training this past week wasn't perfect, unfortunately. I've mentioned previously that I got two jobs. One is full-time with Dick's Sporting Goods. The other is part-time with QuikTrip. Both companies hired me almost simultaneously, though, so both had my schedule as full availability. The result? Two fourteen-hour workdays in which I worked from 7 a.m. to 2 p.m. at Dick's, then from 3 p.m. to 10 p.m. at QT. I considered hitting the YMCA for a swim/run combo on Friday morning, but thought better of it. Twenty-eight hours of work in a 48-hour period stresses my body enough without adding two workouts, even of only moderate intensity. I missed three workouts this week--one in each discipline. I think I've got my availability tuned in for both jobs now, but it won't take affect until next week, which means that this week will be another bruiser. Still, at least I'm working and making money! I see a new bike, lots of races, and a trip to Switzerland in my future! Oh, and the opportunity to pay off some student loans.

I'm already experiencing one of the benefits of being a running specialist at Dick's: complimentary promotional shoes! I got a pair of Brooks Ghost 6 running shoes to evaluate! I'm liking this job more and more. If you live in the Kansas City area, come see me at the Zona Rosa Dick's sometime! We'll talk tri!

In other, somewhat-related news, I have a large, painful lump under my right armpit, with smaller lumps at my elbow. I think they're swollen lymph glands. The armpit one has been there for about a week, the elbow lumps for less than a week. This worries me. I speculate that the lymphatic pathway down my right arm is reacting to . . . something. No idea what. Something potentially serious, I fear. Or not. My roommate thinks it's just stress from too much work and exercise, not enough rest. I'm giving it another week or two, and if it doesn't go away, I'll get it checked out.

Additionally, my right shoulder, which I messed up in the business of being born, has slipped over into full-on shoulder impingement. Expect an article soon on how to deal with shoulder impingement. If I can get to it between two jobs and half-ironman training, that is.
No comments:
Email ThisBlogThis!Share to TwitterShare to FacebookShare to Pinterest
Labels: half ironman, training, update

My body felt very tired after three weeks of exercise. After this first meso-cycle, all the others will be three weeks instead of four, so I hope that this is as tired as I'll be this year. I missed most of my running the third week because the weather was so gross. I know that sounds pretty lame to my readers who are buried under three feet of snow, but I didn't have access to a treadmill, and there were no safely cleared paths on which to run. So I didn't run. I also skipped a bike ride.

Week 4 provided some much-needed recovery. I skipped two of three swimming workouts, because I've had pain in my shoulders. After two years of minimal swimming, I think I've shocked my body with this sudden onset of swim training. So I gave my shoulders a break and skipped a couple of swims. My legs felt tired during my bikes and runs, too, but I got them done!

I also joined the YMCA in Kansas City last week. I wanted to join the community center where I've been swimming up until now, but their hours are more limited, and I've got two jobs now. The Gregg/Klice pool is open from 10:45 to 5:30, and I'm sure there will be days when I can't get there during those times.

It's nice to be making money again, and to have a job where I work certain hours and get paid for them. Self-employment exhausted me, as much as I enjoyed setting my own schedule and self-directing. It's refreshing to have someone else tell me what to do, at least for a while. I don't know how long I'm going to be able to combine two retail jobs, though, not to mention half ironman training. I may be overly ambitious.

Read more »
No comments:
Email ThisBlogThis!Share to TwitterShare to FacebookShare to Pinterest
Labels: half ironman, pushing through, recovery, rest, update

I got a job offer on Tuesday! But it's just for a part-time job with Quiktrip. Great company, great benefits, but not enough to fund my triathlon habit.

I can't bear to endorse just any product, so I'll only profile things I actually use.


I can't believe how much these things have come down in price! I first used the Finis SwimP3 for underwater music, and it cost around $125. Then I got a cheap, made-in-China player a few years ago from Amazon, and it was $45, and the cheapest I could find. Now you can get one for $20! It works perfectly well, too. I don't imagine it will last for very long, but that's to be expected. Besides which, my expensive SwimP3 only lasted for 18 months, before the chlorine and water corroded the connections. A cheap, waterproof MP3 player makes a nice investment for long, endurance-y swims.

You get the roads all to yourself.
No comments:
Email ThisBlogThis!Share to TwitterShare to FacebookShare to Pinterest
Labels: run, runner's high
Newer Posts Older Posts Home
Subscribe to: Posts (Atom)