Pre-Race:
I couldn't sleep Saturday night because I was so excited! I woke up once at 12:45 and started getting ready. I looked at my watch and realized I could go back to sleep for another 4 hours. I woke up again at 2:00, and at 3:30. I couldn't wait to get ready to race!

Stopped for coffee at Quiktrip, and saw another athlete there. Ended up next to him in transition, which was first-come, first-served for space. The Photographer dropped me off, and I grabbed a good spot while she parked the car. I chose a spot by the run in from the swim with a straight shot to the bike out and run out. I grabbed an end spot, so I needn't worry about my bike getting in the way of other gear.

No iPod, for this pre-race; I was focused on having a good time and talking to as many people as I could. I took my bike around the block once to make sure everything was working, and that I was in the right gear to begin. Didn't bother with a run warm up (because I didn't want to), but I did hop into the pool and swim a few laps (love Derby's long-course pool!) to get used to the water. I felt great--long smooth strokes, and completely relaxed.

While hanging out in transition, I'd spotted a super-athletic-looking girl and thought, "Uh-oh! There's my competition!" She ended up being seeded directly behind me for the swim I was 52, and she was Number 53. Even though I was mentally working myself up to give her the race of her life, I enjoyed talking to her while we waited in line for 1-51 to go.

That's slower than I was hoping for, but oh well. Number 53 passed me sometime after 200m. Shortly after that, I got caught up in a clump of much slower swimmers . . . it was a mess, with a relatively slow swimmer trying to pass someone who had really underestimated their swim time. I lost at least 30 seconds to that mess. Still not nearly as bad as the melee that was Shawnee Mission, though!

Bike: 14 miles in 40:09 (20.9 MPH)
Number 53 took it out of me. She came out of transition about 100 yards up on me, and I spent the first 2 miles trying to catch her. She pushed me out of my comfort zone! I don't remember when I caught her--it took a few miles--and I tried to put the hammer down, to break her spirit. But I did NOT have the power to intimidate her. She was every bit as strong as I am, and I couldn't shake her. We spent the rest of the bike ride swapping places, until the last two miles, when I finally let her go. Immediately after, I settled into a good, steady pace. Maybe I should have done that at the beginning, but then I wouldn't have gotten to experience a good, hard race!

A train stopped the race, at least for a few athletes. Although the race organizers had done everything in their power to stop trains for the morning of the race, a group of 8 or 9 got stopped by a long train on the bike course. I saw it coming from far away, and started slowing down. I figured if I was going to get caught by a train, then I wasn't going to bust my butt to pass Number 53 again! We would probably both get caught, but then I'd have gotten some more recovery time! Luckily for us, the train passed just as we were getting close to it; neither one of us got caught. In a totally unfair set of circumstances, Number 53 and I got to blow right by a bunch of cyclists who had been at a dead stop. So when you see that my bike time was 4th fastest out of all the women, you have to take that into account.

T2: 33 seconds
Heck yes!
Run: 5k in 27:45 (8:55/mile)
This is what I expected, in terms of running. It wasn't great, but good for where I'm at this season. My running took a hit this year, because I didn't have the base of two years ago. I was running more like 8:15 then. The run was hard, and it hurt, but that's how it's supposed to feel. I got some nasty blisters on the backs of my ankles; I forgot my Body Glide at home, and didn't put any on my shoes.
I did run this course much better than the last time I raced Rock 'n' Route. In the first mile, as I was running downhill, I reminded myself that I was going to have to run back uphill at the end, and to save some juice for the last half mile. I was able to ratchet up my pace as I came up the last hill, and it didn't seem as high or as long as it did last time because of it. The take-away lesson: know your course!

The Photographer and I spent a long time talking to Number 53 after the race. I think we were both able to push each other on the bike, although she definitely got the best of me. Unlike at El Dorado, I wasn't left with the feeling that I should have finished better than I did. I felt like I did my best on the day, and that the people who beat me did so because they were stronger and faster. It's a good feeling.

This is my last triathlon of the year. I know what I need to work on most: the run. I may be able to go faster on the bike, but it's already near the top of the field. I think I'll get more out of trying to balance my speed on the bike with some more speed on the run. I have it in me to run at least 25:00 for a 5k. I'm going to take it easy for the next couple weeks, then start gearing up for a half marathon in October.
No comments:
Email ThisBlogThis!Share to TwitterShare to FacebookShare to Pinterest
Labels: race, race report 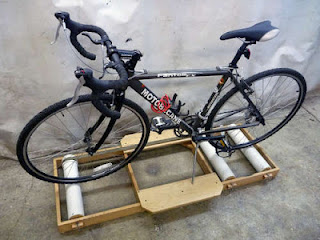 This 45 minute workout is designed for use on rollers. It can be adapted for use on a trainer or spinning bike, but only for cadence work. The principles of resistance and position are pretty drastically altered. But if you're looking for a workout for your rollers (and you think you can manage a music player and headphones while you're on those crazy things), this is perfect for you!

Also, check out this Instructables for a cool how-to on DIY rollers!

This is one of my paid workouts. Looking for the free workouts? Go here!
No comments:
Email ThisBlogThis!Share to TwitterShare to FacebookShare to Pinterest
Labels: spinning, workout
Newer Posts Older Posts Home
Subscribe to: Posts (Atom)