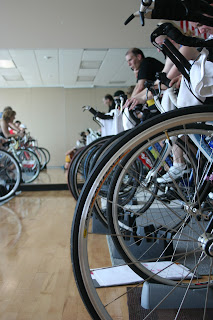 This workout is all about the music. It's an all-around fitness workout set to upbeat, modern tunes. 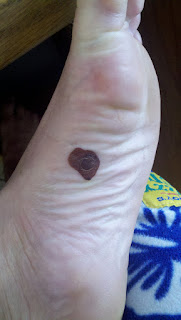 See my cute little blister? I got that while running the half marathon on Sunday. It looked a lot worse right after the race. Now it's in the shape of a heart! It's as if it's saying, "I love running!"

What a magical feeling. Even my blisters love to run!
No comments:
Email ThisBlogThis!Share to TwitterShare to FacebookShare to Pinterest
Labels: half marathon, humor, runner's high

You guys didn't even know I was training for a half marathon, did you? Well, neither did my body, at times. Have to admit, I wasn't too concerned with training in general. I put my long runs in, but didn't do much running beyond that. I certainly wasn't that committed to my program. I had the goal of running under two hours this time, but wasn't really putting in the time to achieve it.

Race morning I overslept a little bit, and wound up rushing through a morning routine. Put lube all over my feet (not enough, it turns out). Grabbed a race belt for my number and ate some oatmeal and a fried egg. My running buddy picked me up, and we were out the door for downtown Wichita. We jogged across the bridge over the Arkansas River (which looks more like a meadow, right now), got a cup of coffee (Prairie Fire, the main sponsor, is a local coffee roaster and distributor), and went to stand in line for a dozen port-a-johns. There were a dozen port-a-johns, and the race directors were expecting around 4,000 people. Anyone else see a problem with that?

So we stood in line for a good 30 minutes, and got out of the toilets just in time to start the race on time. It was a close call, though. I was stripping my jacket off as we ran, and fortunately saw my dad on the sideline, waiting to start the 5k. He was kind enough to babysit my jacket for the duration of the half marathon. And then I plugged in my headphones and got to work, side-by-side with my running buddy.

I sped away within the first mile, trying to cut through the crowds, fully aware that I should slow down and bide my time. But I hate being behind people! So I took off and ditched my running buddy. She caught me up at around mile 3, going steady the whole time. We made it until somewhere between miles 4 and 5 together, then there was a hill, and I just felt like pushing it, knowing (again) that I was going to pay for it later.

And it was in college hill that things started to get tough. My calves had already been tight, but that was starting to fade. But somewhere after mile 5, where I usually start to feel really good, I ended up with a tough cramp in my left psoas (deep in the front of the hip). I ran through it, and it spread to my right quadratus lumborem (low back). I found that if I breathed deeply and engaged my transverse abdominus (deep belly) on my exhale, it went away. And I kept running.

I kind of hit a very short second wind around mile 6 (I think it was my first gel kicking in), but it didn't carry me very far. I took another gel somewhere around mile 9, and was feeling good by mile 10, ready to push it in the last 5k. Miles 11 and 12 went really well. Then the wheels came off. I was suffering, with just a mile left to go, and my body just wouldn't work anymore. Both my psoas cramped, my low back cramped, my middle back cramped, my shoulders cramped, my diaphragm cramped. I could hardly breathe the pain was so sharp and so bad.

I slowed to a walk a couple of different times. The pain was just too bad, and I couldn't make my body do it anymore. My iPod was telling me, "He will make a way where there is no way / He will bring His peace where there is no peace." I took my headphones out. I found that I could concentrate better that way.

I grabbed a bottle of water and a mylar blanket, even though I was burning up, and staggered in the direction of the medical tent, barely able to stand from the pain of the cramping. I figured I'd hang out there for a while, just in case. I managed to get both shoes off, and discovered a big, bloody blister the size of a quarter in my left instep. The right instep had a blister, too, but no blood. I eventually just laid down on one of the cots in the medical tent, and felt immediately better since my psoas weren't being tasked with holding up my whole body anymore.

My dad found me and congratulated me and showed appropriate pity for my disgusting blisters. He also gave me a Gatorade protein recovery drink that they'd given him after his 5k (which ended up being more like a 5 mile run, because the course wasn't properly marked and the lead cyclist missed the turn) and he hadn't needed. I made myself drink that, then managed to leave the med tent and start staggering around to look for my running buddy, who had passed me in that last mile and left me in the dust. She was looking and feeling great (she's still in great shape from taking 4th in her age group at Vineman)!

I'm going to try again to go under 2 hours in the spring at the Wichita Half Marathon. I think it will be a cinch, if I actually train and nail my nutrition. I don't know what I need to do differently with the nutrition, but I assume that all that cramping was an indication that something was very wrong. So I need to dial that in a little better. I had water and Gatorade on the course, and took two gels. I felt well-hydrated going into the race, but obviously it could have been better in some respect. And I probably didn't pace myself as well as I should have. I think I would have been fine if I had just stuck with my buddy the whole time; I think I could have finished with her with no problem.

I do feel like I pushed my body absolutely as hard as I could on this particular day. The weather was cool and rainy and overcast, but a little humid. I would have liked it a little bit colder, actually. But it was a good day for a run. And the pain that I am in now tells me that I demanded a lot from my body, as much as I could. The Photographer was concerned that I was in so much pain (and grossed out by my blister), so I had to explain that for me this is actually a good thing!

And hey! I also set a new PR by almost two minutes!