Emily's doing this thing called the Dukan Diet, which (I think) is sort of like a low-fat version of Atkins. It focuses on lean proteins and low-sugar vegetables, with some allowances made for whole grains and fruits in the maintenance phase. Since I do most of the cooking, I'm showing my support by coming up with interesting things to eat within the bounds of the diet, so she doesn't get bored with the bodybuilder version of "riding paniagua": chicken and water, water and chicken. This is one of the things I came up with.
Ingredients
1 bunch of broccoli crowns (about 1 lb)
4 cups of chicken or veggie broth (I used boiling water and chicken bouillon)
1 whole onion, sliced
1 teaspoon of cooking fat (I used bacon grease, but you could use any cooking oil)
Salt & pepper to taste
Spike all-natural gourmet seasoning (or other generic spice mix) to taste

Procedure
Slice onions. Heat oil in a medium saucepan over medium-low heat. Add onions to the oil. They should bubble and hiss softly; they shouldn't spatter or spray. Let the onions sweat in the oil, stirring regularly, until they're soft and translucent and a little brown. This can take up to 20 minutes, but the longer you let them sweat, the tastier the soup will be in the end.

While the onions brown, chop the broccoli into small pieces. I used a food processor to pulverize mine. They don't have to be really fine bits, because they're going to end up pureed anyway. But smaller pieces cook faster.

When the onions are where you want them, add 4 cups of broth (or water and chicken soup base) and the chopped broccoli. Cover the saucepan and let it come to a rolling boil. Add salt, pepper, and Spike seasoning (or whatever you're using). Turn the heat down to a simmer.

Use an immersion blender to blend the soup. If you don't like soup with texture, strain the soup through a fine mesh collander. Otherwise, your soup is ready.

Obviously, this soup would be even better with cream and cheese, but then it wouldn't count as Jamie's (and Emily's) Diet Food. Even without cream and cheese, the soup is pretty good. Not particularly filling, so I recommend it as a side dish, or with a nice salad.
No comments:
Email ThisBlogThis!Share to TwitterShare to FacebookShare to Pinterest
Labels: diet, food, recipe

Trihardist Vlog Preview: A Short Ride on the W&OD

I bought myself an (inexpensive) action camera! I have some ideas of ways to incorporate it into the blog: I'd like to make some free video cycling workouts; I feel like my audio workouts are a little behind-the-times, now that there are so many cool tools like Zwift and Trainer Road and even GCN's training videos! It's time for me to innovate. I also have ambitions of doing a vlog like Cycling Maven and Vegan Cyclist do. And of course I want to take footage of my races like all the cool kids!

This is my first experiment with the new camera. Let me know what you think, and if there are specific things that you would like to see now that I can do more video!
No comments:
Email ThisBlogThis!Share to TwitterShare to FacebookShare to Pinterest
Labels: cycling, ride-along, video, vlog 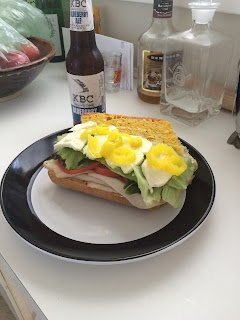 I am shocked--SHOCKED--that I did not mention that I survived Ironman training almost exclusively on S'mores Pop Tarts. I have scoured my old blog posts, and I can find no mention of the fact that I brought two boxes to Spain (wasn't sure I could find them over there) and ate a box and a half on the Ironman bike course. In case you're unfamiliar with the packaging, that adds up to twelve Pop Tarts over 112 miles. I've come a long way from my all-natural, all-raw diet of a few years ago; I figure life is too short to eat like a rabbit.

Philosophy aside, the Pop Tarts worked great. They pack a lot of sugar for their size. They're compact. You can fit six packages in your jersey pockets, if you need to. That's about 2400 calories! I usually put two in the right pocket and two in the left pocket, then re-stocked at special needs (or a 7-eleven on a training ride). The s'mores were my favorite flavor, followed by frosted blueberry. The s'mores flavor dry out your mouth more, FYI. Just in case you want to try.

I completely burned myself out on Pop Tarts, though. I've experimented with several whole foods this season, using Potent Portables as a starting point and branching out from there. I've found a few things that I've liked, but most of them don't work for racing. I use drink mix (Skratch Labs) and gels (currently GU, but I'm still experimenting) almost exclusively when I'm racing; everything else is too hard to eat in close quarters at speed and intensity. I want to try Medjool dates soon, on the recommendation of a few prominent vegan cyclists.

All of which is to say that I use spam musubi in training, pre-race, and post-race. It would probably work fine for triathlons, though, assuming your tummy can handle spam during a race. Be sure to try training with it before you race with it; anything else would be stupid! Don't be stupid!

This is something my Hawai'ian friends made all the time. It's a staple at convenience stores and picnics. Super delicious, compact, with lots of carbs and salt; it might pack too much fat for some of you, though. Try it out and see what you think! I can almost guarantee that nobody else will have these at your next ride or race.

Since I'm taking a few weeks off from cycling, I've had time to catch up on other things, like e-mails. I got one about a week ago from the marketing director for Skinny & Co. Coconut Oil asking if I'd like to do a review. I'm not much into the "all-natural" scene, but what the heck! Coconut oil would be a nice, natural alternative to body lotions after an hour in the pool. And I might try trading my chamois cream for coconut oil on a few rides, just to see what happens. If nothing else, it will probably smell better than Chamois Butt'r.

I've also been promised a discount code for readers and followers. So if I like it and recommend it, you can get a few dollars off.