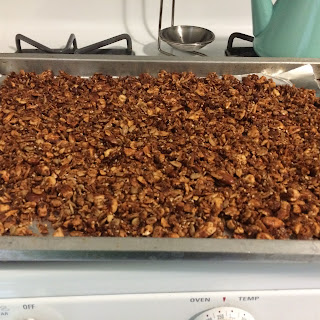 No comments:
Email ThisBlogThis!Share to TwitterShare to FacebookShare to Pinterest
Labels: food, recipe

When I first started refereeing rugby, I began with 15s. That's the traditional form of rugby, in which team plays 15 people per side. As a referee, that means keeping track of 30 people, staying out of their way, positioning so that you can see the ball, and making sure that everyone is obeying the laws of the game. The pros have the aid of assistant referees on each side line and a television match official who can examine some plays that a referee might miss, not to mention players who know the laws well. In the low-grade games they allow beginner referees to officiate, you get none of that. Needless to say, it's a difficult job. And you get yelled at if you don't do it well (I didn't do it very well, especially at the beginning).

After a few months of refereeing 15s, I refereed at a 7s tournament. In 7s, each team fields 7 per side. That means there are fewer than half the number of people in a 15s game. The matches are faster and more expansive, with fewer pile-ups and better lines of sight for the officials. It's way easier to referee 7s than 15s. I wish I would have started with that; it would have allowed me the space to learn how to manage the game better, and that experience could have carried over to my 15s game.

That's how this weekend's race felt. The field was only 7 women deep on a flat course with open, flowing turns. It reminded me of racing in Kansas, where the women's fields were smaller, except now I have more skills and strength on the bike (because I'm not simultaneously training for swim and run). The small field size allowed us to hone our tactics, and the turns were technical enough to allow practice without being too risky. And the race was only 30 minutes. As I tell my cycling classes, you can survive just about anything for 30 minutes.

I had one teammate with me, and she and I decided that we would put the hurt on the rest of the field. The plan was for her to take the pace out hard (which she does really well) and try to keep a break to the end while I sat in. If she came back before the end, I would counterattack and try to stay away for the rest of the race.

Robin sprinted from the start and got a gap with one other cyclist (a junior from the Mermaid Winery team). One of the women was off the back from the start, leaving four of us to work together. The other woman from Mermaid must have had trouble clipping in, because it took her a lap or two to get up to us. I was sitting on wheels and not working. The group I was in wasn't able to work very well together, probably because I wasn't taking any pulls. One cyclist, who looked pretty young, didn't understand why I wouldn't pull; the other woman (Marie, from US Military Cycling) was trying to explain that I was just doing my job, and they would have to work around me, but they weren't able to trade pulls very well. At one point, the younger girl pulled through too hard and dropped Marie. I pulled Marie back to her wheel because I'm nice and it was more fun with the three of them together.

The other Mermaid woman (Giselle) managed to bridge up to Robin's group, but the younger Mermaid girl (Samantha) dropped off the pace and came back. With her in the group, they were able to get more of a rhythm going, and I took a few turns on the front. We had picked up one of the juniors (they started 30" ahead of us, another thing that made this race fun), and he ended up in our rotation . . . sort of. With about 4 laps to go, I ended up on the junior's wheel, and no one came around me. So I slowed waaaaay down; everyone else had realized that Robin and Giselle weren't coming back in the last 3 or 4 laps, or whatever we had left at that point. With those two safely off the front and everyone else sitting in on my wheel, I figured I would take a chance at going off the front myself for a third place, rather than leaving it to a final sprint.

The course was dumbbell shaped, with a big loop on one end and a big box on the other, connected by a divided straightaway. On the first half of the big loop with two laps to go, the young girl who didn't have much experience with tactics tried to take a flyer off the front. We all covered it, no problem, and I ended up sitting second or third wheel (don't remember for sure) coming into the right turn onto the straightaway. I went wide on that turn and kicked hard on the straightaway. Carried the speed into the next right, then a flowing left. After that, straight into the wind for about 100 m, then another left. I had a gap of at least 50 m by the first time I looked back, with my heart rate seriously in the red (I saw the number 186 when I looked down). I kept grinding, trying to keep the heart rate right around 180, especially through the tailwind section on the second half of the box. Hit the finish line and got the bell for the last lap.

As I took the right-hand turn into the loop, our team tent got caught in the wind and blew almost directly into my path. It didn't quite hit me, but the wind was getting mean and nasty. Looking at the weather data from yesterday, looks like the strongest gusts were over 40 MPH. But I know wind pretty well, and it felt more like 50 MPH to me. I was worried that the other girls, sheltered in their little group, would be able to catch me in all that wind. But every time I looked back, they were nowhere to be seen. I was also worried that the officials were going to stop the race early, because the weather was starting to look really bad. But they let it run to the finish, and I came across the line all on my own to take third place.

Robin got second. I think she had done so much work at the beginning that Giselle was able to ride her straight off her wheel. Still, Veloworks-Spokes, Etc., women went 2-3!

I am really pleased with my performance yesterday. Tactically, it's the best race I've ever done. I did exactly my job in the group, saved my legs, and timed my attack perfectly to get away and stay away. And I won $25 from my team and got to stand on the podium (sort of)!

The question now is if I can take some of the lessons learned in this 7s match (there were literally 7 of us) and apply it my next 15s match, probably Ride Sally Ride in three weeks.
No comments:
Email ThisBlogThis!Share to TwitterShare to FacebookShare to Pinterest
Labels: cycling, race, race report, victory

No race report for me this week. I'm home sick. I had everything all packed and ready to go last night, in the hope that I would wake up feeling better this morning. But no such luck.

One of my teammates got third place in the women's 4 field this morning, though! Way to go, Kim!
I've missed a full week of training with this stupid cold. I hope to be back to normal next week, so I can resume my training. I signed up for Trainer Road on Monday, but I haven't been able to do any of the workouts so far!
1 comment:
Email ThisBlogThis!Share to TwitterShare to FacebookShare to Pinterest
Labels: cycling, race, sick
Newer Posts Older Posts Home
Subscribe to: Posts (Atom)