"In Soviet Russia, Weather is Under You!"

I only wish that were the case. I've been under the weather for over a week now, and home sick for the past two days. I think I have a sinus infection. It feels like someone is standing on my face. I also feel like someone has been hitting me in the back with a baseball bat, but that may be because I've been sitting down much more than usual. 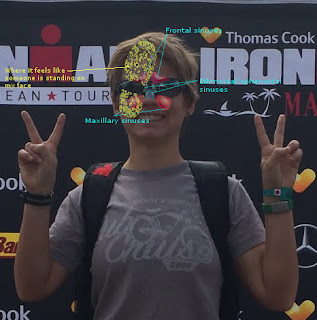 This is the first sinus infection I've had since college. I haven't had one (at least not one that's bad enough to bother me) for almost 10 years. I used to get them all the time--at least once a year, all through high school and college--but they stopped at about the time I started doing a lot of yoga. I think all the deep breathing helped keep my sinuses clear enough that no nasty little buggies could grow in them. So there's your pro tip for the day: do yoga and pranayama to prevent sinus infections!

I haven't been doing as much yoga in the last year or two partly because I'm not teaching yoga (and I'm too lazy to do it without that motivation) and partly because of the way everything ended with my "guru" (let us not speak her name, for it is evil). In spite of that, I tried to bring myself back from this illness by natural means: yoga, pranayama, neti pot, goldenseal, and lots of capsaicin. That was last Tuesday. And yesterday, like I said, I woke up feeling like someone (someone really fat) was standing on my face.

So I have abandoned the touchy-feely, au-natural crap in favor of decongestants (not helping), Excedrin (also not helping), and good old western medicine (we'll see). I have an appointment with a doctor at 2:45 today, and I'm hoping that the evil pharmaceutical industry will be able to help me out.

The worst part of this whole thing was that I have had to take it easy on the training. Last weekend was the first weekend since Snowzilla that there weren't mountains of snow for us to be crushed up against. So the rest of the team went out for a nice ride, and I stayed at home and watched the cyclocross world championships with hot tea and a quilt. I'm still sick this weekend, and I'm afraid I've missed the last decent riding-outside weather that we'll have for a while. And I have all the usual fears that having two weeks mostly (I've still been teaching cycling classes at work) off the bike will destroy my fitness, and I'll be a sad sack of under-cooked grits when I try to get back to actual riding. Add to that the fact that the racing season basically starts in two weeks, and I have an almost overwhelming compulsion to try to ride through this illness.

But I know that will make the recovery longer, and that I will serve my fitness better by resting instead of riding and blah blah blah. Which is why I'm sitting here writing blog posts and making funny graphics instead of outside (or on Zwift) training.

Hope your February is shaping up better than mine, whether you're under the weather or the weather is under you.
Email ThisBlogThis!Share to TwitterShare to FacebookShare to Pinterest
Labels: pain, sick, training