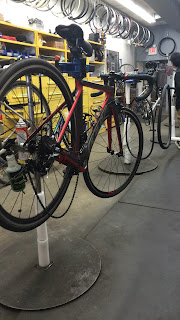 My bike is creaking.

It has been creaking for the past several months. It started shortly after I got back from Spain. I thought it was my rear wheel, or possibly related to the rear derailleur.

Take the bike in for examination. Wheel fairly true, rear derailleur jockey cage bent. Replace the rear derailleur. Still creaking. But it's the winter and I'm not riding that much or that hard, so I don't notice.

Then I start riding with my team. It becomes an issue. It becomes embarrassing. "Jamie, I thought you got that fixed!" I'm getting concerned that it's the frame itself, and make an emergency stop at a sponsor shop at a race. They take a look at the frame, specifically a spot on the seat tube where a paint chip came off in the first week I had the bike. They say it's probably just cosmetic, but take it to my LBS just to be sure. Also, I have a bolt missing on my derailleur hanger, which is probably why the jockey cage bent in the first place. They replace the bolt, true my wheel slightly, and send me on my way free of charge. If you are ever in Hyattsville, Maryland, stop into Arrow Bicycle and spend some money with them!

Take the bike to my LBS (the one that deals Felt). They say the paint chip is no big deal; it's just paint. Advise cleaning out the seat tube/seat post area and applying more carbon assembly paste to fix the creaking. We do that. Still creaks.

Take my bike to a teammate who used to be a mechanic for a second opinion. His girlfriend had the same problem with her cross bike. Apparently, this is a common thing for BB30s. Everyone knows this. Apparently the manufacturers don't really care. We add some loctight compound and lots of grease to the BB bearing cartridges to try to keep them from wiggling. Cross fingers.

Take my bike to my LBS (the one that sponsors the team), desperately hoping that something can be done before I do this race this weekend. We take out and rebuild the bottom bracket. Bearings don't feel as smooth as they should. Apparently, BB30 bearings tend to degrade faster, because they get dirt, water, grit, etc. inside them. Manufacturers apparently know, but (again) don't really care. We order this, and rebuild the bearings in the hopes that it will tide me over for this weekend.