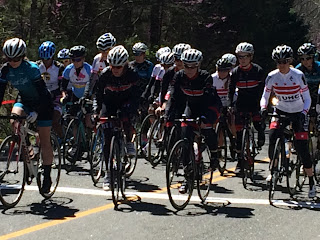 Emily and I took the weekend to get away. We stayed at a KOA campground about a mile down the road from the race staging area, which was at a middle school near Charlottesville. It rained both nights we were there. Not the best camping weather. But we brought an air mattress this time, so at least we were able to sleep (or I was, anyway).

We went into Charlottesville to check out the town, since neither of us had been there before, on Saturday. Had a nice brunch at a very college-town type bar/restaurant. Happened to pass a women's rugby team warming up on the way to lunch, so after eating we found the game and watched UNC play JMU. We caught part of two games; I guess UVA women's rugby was hosting a round robin or something for the weekend. But holy cow! the UVA women are terrific! I was pretty sure we were about to be overrun by a tribe of Amazons when they came out to warm up on the pitch. They decimated the Virginia Tech team. It was a real romper. The weather was sunny, pretty, warm, and windy--a beautiful day to catch a game, but an unexpected detour that led to a mild sunburn for me (because I didn't think ahead enough to put on sunscreen).

After the rugby game, we headed back to our campsite. Emily napped while I headed out from our campsite (so convenient) to ride the course. The course was about a 10-mile loop with one significant hill (took about 1:30 to climb), some sweet descents, and lots of spaced-out rollers. I was a little concerned about my ability to hang with the group on the big hill (which I shall hereafter refer to as the Trump Hill, because there was a Trump Winery at the peak). I practiced a few ramp-ups and sprints in the finishing stretch, which was helpfully marked at 1km, 500m, 400m, 300m, 200m, and 100m to go.

Saturday night was very rainy and windy; Sunday morning was uncomfortably chilly. I had teammates in the women's 1/2/3 and men's 4 fields, which started at 9. I headed over early to watch them race. I caught the first 3 of their 5 loops before heading back the middle school to find my fellow cat 4s, warm up, and get ready for staging. The race was supposed to start at 12:30, but the start was delayed; high winds had taken out some power lines, and Dominion Power had to block the road with their utility trucks. As a result, our race was shortened from 3 laps/30 miles to 2 laps/20 miles. Crap. I could see, in my mind, the intensity ratcheting up significantly. Neutral roll out from the middle school to the start line, where we re-staged as we waited for the cat 5 men and the juniors to roll out in front of us.

The race started fast, but quickly settled. I needn't have worried about the Trump Hill, because the pack doodled up the hill like we were out for a charity ride. My teammate, Kim, was firmly near the front of the race, covering any attacks that might try to go, but nobody put in any significant digs. There were some sketchy wheels in that pack, too; 30 cat 4 women, and I know of at least 3 that were in their first race. I had to lean into other racers on a couple of occasions when somebody else did something unpredictable. Fortunately, all the people with whom I brushed elbows were solid enough that I didn't take the pack down as a result.

There was a second mini-hill on the backside of the course, before the rollers started. Something in my brain told me to put in an attack there, so I did, with Kim still sitting on the front of the pack. I got maybe 10 seconds max before the pack shut me down, but I think I shook some weak wheels off of the back. Going into the second loop, our numbers were down by a little bit. Pace stayed fairly low until the next time up the Trump Hill, where somebody put in a serious dig. I sprinted out of the saddle to cover, but did too much too soon and dropped the pack behind me. I pulled through, expecting the pack to come through and take over, but they were a good 10m behind me. So I was hanging out there in no-man's-land, waiting for them to come through so I could tag onto the back. I almost got dropped there, but managed to stay within reach through the descent. It was an attack after the next corner where I lost touch and got blown off the back.

I was still within reach to chase back on, though, so chase I did. I picked up another woman who had fallen off the back, and we started rotating through. Then another two women came blowing by us and the four of us worked together . . . kind of. It wasn't very organized. There were two girls who were doing too much of the work, rather than doing short pulls. Another woman and I kept shouting "SHORT PULLS!" But we were all red-lining and it was hard to hear. Once we got within touch of the main pack, we all sprinted separately and clung on to the back of the lead group, which was sitting up and spinning again.

I tried to ramp up the pace at the front to string out the pack a little more, but no one else was willing to work at it. There was one woman who was strong, but got caught on the front doing all the work as everyone else sat in. I drifted back into the pack again, and tried to talk to my remaining teammates, Robin and Tina (Kim had cramped and dropped off the back, I think at the same attack where I got dropped). Our race plan was that Tina would be our A rider and Robin would be her lieutenant; since I was still in the pack and had the legs, I wanted to try to tow them close to the line for the sprint. I don't think I communicated that well, though. And I didn't want to blab out our strategy in front of the women who were strong enough to compete. By this point, there were about a dozen left in the pack.

I positioned myself well coming through the last hard right turn into the finishing straight. The line was about 1.5 miles away, at that point. I knew what to expect, what to look for, because I'd done it a few times the night before. We passed the 1km marker, and everyone was still sitting up and taking it easy. I waited until 500m to go before I started ramping it up and shouted to Robin to get on my wheel. I was just hoping that Tina would see and follow. I was hoping to drop them off at the 200m mark, but only made it to 300m before pulling off to the left. Some girl almost bowled me over trying to come around on that side. Tina put in a great sprint, but started it too early. She got nipped at the line for 4th place. Robin came in at 8th, I dragged in at 10th, and Kim made it in at 12th.

Lessons learned: I'm getting stronger on the hills. I could have picked up that attack on my own, I think, if I had accelerated a little more slowly. I need to remember that I can pull someone back gradually, and don't have to burn a match every time a gap opens up. I also need to be more proactive about communicating with teammates. I feel like we could have had a better result if I had recruited Tina and Robin more proactively. I'm still new to the team, though, and I don't want to be the punk who comes in and thinks she knows more than everyone else, ordering people around.

This weekend, we head to the Carl Dolan Memorial. This weekend, we get the podium.
Email ThisBlogThis!Share to TwitterShare to FacebookShare to Pinterest
Labels: cycling, race, race report