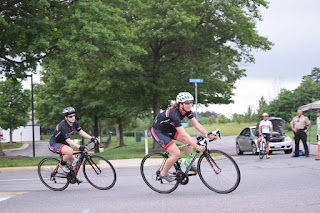 I spent last week in Wichita, so I haven't been online much. I raced Ride Sally Ride in both the women's open and the women's 4. It was my first time doubling up with two races in the same day! I ended in the top 10 in the 4 and managed to finish with the pack in the open (although it was so painful I wish I would have been dropped).

Last Saturday I rode with some old buddies in Wichita and got my legs ripped off. But I never would have done that particular ride when I lived in Wichita before; I wouldn't have been anywhere close to keeping up! I'm much faster now than I was then.

Last Sunday I rode to a donut shop in Wichita for a recovery ride. I broke my chain along the way. I'm very disappointed in Wichita; I was stopped on the side of the road fixing my chain for about half an hour, and no one so much as slowed down to see if I was okay--including two or three other cyclists! Shame on you, Wichita; shame on you. I've had cyclists, runners, walkers, and motorists stop to see if I needed help here in the big city. Where's the Midwestern charm?

Tomorrow begins the Tour of Washington County Stage Race, with a 41 mile road race. This is another combined women's field, but there's no center-line rule! There's also a TT and criterium on Sunday. I'll let you know how it goes!
Email ThisBlogThis!Share to TwitterShare to FacebookShare to Pinterest