This is a review of a product that was sent to me by the manufacturer, Skinny & Co. I'm not being paid for this product review, but I also didn't pay for the product. It's a freebie. You can view my unboxing of the product here. Now let's get started.

Skinny & Co. make fancy coconut oil products. Raw, pure, vegan, extra-virgin, wild-harvested, single-source . . . any other catch-words I can include? It's coconut oil, so it's also gluten-free. They also emphasize their charitable work in Vietnam, whence they source their coconuts, and the fact that they recycle a lot. 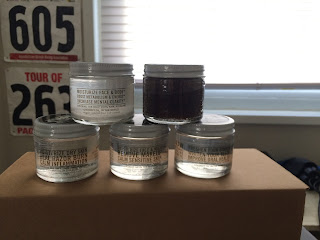 The packaging is pretty cool. They sent me five of these little jars that are quite pretty. My only complaint is that it's hard to tell which one is which. All the jars look the same, and the product name does not stand out very well. So far I haven't put facial oil in my oatmeal or anything, but I could see it being a problem with this packaging. In this box, I have the coconut oil, body butter, sugar scrub, oil pulling, and facial oil.

If you've read this blog for a long time, you know that I went through a raw foods phase. I'm over that now, and I'll tell you why: it's really hard to do, it didn't make me feel any better, and it's based on scientific quackery. That's part of why I'm skeptical when it comes to the health benefits of things like single-sourced and cold-pressed. But I also really like coconut oil, so I've tried all of the products (even the oil pulling) with an open mind.

Skinny & Co. Coconut Oil
Surprisingly, I already had organic, extra virgin, cold-pressed, unrefined coconut oil in my pantry (because that's the coconut oil that Trader Joe's sells). This coconut oil smells like the Trader Joe's kind, maybe slightly less coconutty. Tastes a little better on its own than the Trader Joe's brand, I think. I've put it in smoothies, and oatmeal. It adds a nice flavor. Seems like a good product.
Skinny & Co. Sugar Scrub
This is my favorite product of the five I've tried. It has a strong flavor of brown sugar, which makes me really want to eat it. The sugar is pleasantly abrasive and washes away easily in the shower. It's a nice alternative to exfoliating products with stupid microbeads, which I don't like to use because of the environmental concerns associated with them. Once the sugar is gone, the coconut oil in which it is suspended remains to leave my skin feeling very soft without feeling greasy. Love this stuff.

Skinny & Co. Body Butter
This is coconut oil with some essential oils so that it smells nicer (and maybe blah blah blah something about the health benefits of essential oils). Except that Emily and I both hate the smell. It smells strongly of black licorice, so I assume there's anise oil in there. It's a nice product, and I like it as a moisturizing product, but I do not like the smell. If you like black licorice or anise, though, you will probably like this.

Skinny & Co. Facial Oil
I was excited to try this product, too, because the skin of my face is frequently dry. It also has lavender and chamomile in it, so I thought it might be good as a natural sleep aid. Unfortunately, it has the same essential oil blend as the body butter, and that anise smell overwhelms everything else for me. I like the way it makes my face feel, though. I can't speak to how well it removes make-up, because I don't wear make-up.

Skinny & Co. Oil Pulling
Have you heard of oil pulling? I hadn't. I've done some research on it, though, and found that it's a traditional practice in Ayurveda (much of the empirical research that's been done on oil pulling is from India). I probably read about it in the Hatha Yoga Pradapika and didn't even realize it. In Ayurveda, it's traditionally performed with sesame oil, but Skinny & Co. sells coconut oil, so they advocate using coconut oil (preliminary research shows that coconut oil is also effective, though). I followed an online guide for how to oil-pull for the first time this morning. Coincidentally, I had a root canal on Wednesday, so my mouth hasn't been feeling awesome. I hoped that the oil pulling would help soothe my gums and make my breath better. It hasn't made any difference so far, but the studies I've read suggest it might not make a difference until after 5-8 days. It's kind of gross, though, and time-consuming. You're supposed to swish a tablespoon of oil in your mouth for 5-20 minutes. Not seconds; minutes. That's a lot of time when you have appointments starting at 5 a.m. I wonder if it's equally effective if you do it before bed.

That's about all I have to say about Skinny & Co. I like the product well enough, although I probably wouldn't have gone out and purchased it on my own. Health and beauty products in fancy little tins aren't really my thing. I do like the sugar scrub, though. I may even keep using that.

For more info on Skinny & Co., you can visit their website here. If you have other questions you'd like to ask or are a raw foodist who wants to attack me as a heretic, please do so in the comments below!
Email ThisBlogThis!Share to TwitterShare to FacebookShare to Pinterest
Labels: product placement, raw food, review