I did not sleep well on Saturday night. I had trouble getting to sleep, and once I finally fell asleep (well after midnight), I woke up every hour or two throughout the night. I got up for the final time at 6-ish, packed up, and drove to Boonsboro.

My stomach was not happy. By the time I got to Boonsboro, I had to use the port-a-loos in an emergency kind of way. Not sure if it was something I ate; I think it's more likely that my body doesn't like hot, hilly road races and was rebelling against the previous day's effort. I started warming up on the trainer but had to take another couple of nature breaks. My legs felt heavy and unresponsive.

I used Best Bike Split to estimate the time I could do on the time trial. I had a pacing strategy that involved going hard on the uphills and recovering on the downhills. I don't have a power meter to monitor my effort level; I was going strictly based on feel. I definitely went hard on the uphills, and recovered on the downhills, but I don't think it helped. It took me to the halfway point to catch my 30 second (ahead) person, and as I made the turn-around I could see my 30 second and 1 minute (behind) person close behind me. They passed me shortly thereafter. The wheels started to fall off. I kept an eye on my computer, just to know how much suffering I had left to go. My 30 second person re-passed me right before the finish line. I stopped my computer and let out a sigh. My time was about 3 minutes slower than last year, and I felt like I'd given absolutely everything I had. I was gutted. Last year, I'd been able to do the time trial in around 28 minutes, and it was good enough for third place. This year, that time would have gotten me first, but I couldn't manage anything close to it. Last year I only did half of the road race, though, and I certainly didn't end up third in it! The increased stress of the previous day was enough (I assume) to ensure that I couldn't hold anywhere near my FTP for the time trial.

And I'm not trained for time trials, anymore. I've been training to my strengths over the past several weeks, which I now think are short, hard efforts--in other words, criteriums! But last year I had 10 years of steady-state training in the bank from triathlon, which gave me an edge in the time trials but I was at a disadvantage in everything else. This year, my time trialing prowess is considerably less, but I've gotten better at the other things. It all balanced out, at least in this race.

After the time trial, I headed back to my car to warm down on the trainer and eat my snacks. My teammates tried to encourage me, but I was feeling low. I stopped spinning after about 10 minutes, stomach still churning, and packed up the car. Back at the hotel, I took a shower and ate some more food, both of which helped me feel better. I packed up the last of my stuff and loaded up the car for one more race.

I set up the team tent (I had custody of it for the weekend) and all my stuff and started spinning right away to warm up. The race was running behind schedule, though, so I got off and walked around. I made a visit to look at the TT results and noticed that I'd fallen to fourth in the GC behind a friend who had taken first in the TT. Grr . . . I needed to gain 20 seconds on her in the criterium in order to keep my podium spot (but also, good for her for kicking butt in the time trial)! I still felt nauseous as I finished my warm-up. A teammate brought me a nylon stocking full of ice to stick down my back, and I can't believe how much it helped!

I got a call-up and started on the front row of the criterium! My start was textbook, too; I got myself clipped in on the first try without even looking. I went into the first few laps sitting third or fourth wheel and stayed there for a while. As the swarm came up around me, I let myself be washed back until I started seeing cat. 4/5 bibs. Some of the surges were hard, but I felt surprisingly awesome! Gone were the waves of nausea; gone was the feeling of deadness in my legs. Every time I demanded a surge in power from my body, it responded, and I was able to stay with the lead group as more and more riders got shelled off the back.

The course was fast with two punchy hills and one sharp right corner. It took me some time to get the hand of the hard right, but I finally found the right line and was able to carry speed through it eventually. The field felt safe and confident. It was some of the most fun I've ever had racing. I even kind of felt like I belonged with the cat. 1/2/3s!

First and second place in the cat. 4/5 GC were still in the lead group with me, but when I looked behind me I realized that everyone else had been dropped and pulled. Going into the final prime lap, an intermediate sprint for bonus seconds, I lost touch with the back of the pack. I surged to catch back on, and spent a few laps chasing. There was one other woman behind me, and we tried to work together to catch back on. But my ice had melted by that point, I was overheating, I had the chills, and I had what I wanted--third place in the GC was in the bag. I pedaled just hard enough to stay within sight of the main pack, and managed to finish as the very last rider on the lead lap. 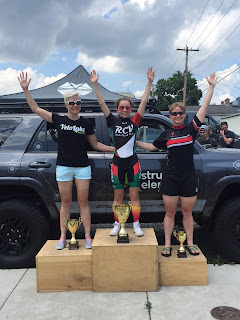 So I got third last year and third again this year in the Tour of Washington County, but it took a lot more work this year! This was my goal race, and as much as I would have liked to have won it, first and second place were stronger and deserved their spots. I feel like I've grown a lot as a racer in the last year. My legs have gotten stronger, sure; but I've also learned a lot about the tactics of the sport, how to ride in a pack, how to conserve my energy, how to move up or drift back as needed. I've learned some of my strengths and weaknesses as a rider, both in terms of natural and learned ability. Those were big goals that I had for myself going into this season.

But my biggest goal of the season was to move from cat. 4 to cat. 3. Tour of Washington County was my last race as a cat. 4. I submitted my upgrade request and it was confirmed this morning. I'm officially a cat. 3 racer now!
Email ThisBlogThis!Share to TwitterShare to FacebookShare to Pinterest
Labels: criterium, race, race report, road race, stage race