In which: I do not win

This was my first weekend in the 1/2/3 fields. I haven't yet upgraded to cat. 2; I'll still do Taneytown as a cat. 3. But after that, it will be time to upgrade, and I will have to race with the elites. These races gave me a preview of what that might be like.

S'Ville Bikes CX
Looking at the pre-registration before Saturday, I wasn't overly nervous. All the women registered were people I'd beaten before--which isn't to say that I always beat them or expected to beat them, but I felt like I was in a field that matched my abilities. Then, in line for the port-a-potties, I spotted a familiar face behind me. It was Julie Kuliecza, professional road cyclist and woman who is much faster than I. Besides being a little intimidated, I was also excited to see how hard a professional can go, and how hard I would need to work as a result.

Rain began to fall as we rolled over to staging, and the temperature had plummeted since I'd arrived two hours before. The course was mostly grass, a little uneventful, with a few long, steady uphills and one short single-track section in the woods. With rain falling steadily, I figured everyone now had way too much air in their tires, but at least we'd all have about the same disadvantage. Five of us rolled off in the 1/2/3 field. Julie took the hole shot, and for a while I was on her wheel! She almost slid out going too fast through a corner, which let us all know to be more careful. For a second, I thought I might be able to ride with her. Then she looked back, saw all of us still in touch, and turned on the gas. She rolled right away from the four of us and we didn't see her again until the podium. "Don't go too fast, Julie!" we yelled after her, because we didn't want to have to do five laps.

Teammate Beth was on my wheel throughout the first lap. Going into the woods, I tried to ride hard and take good lines so I wouldn't slow her down or mess her up (Beth is better than I am, technically). Instead, I hit a sharp rock and gashed a huge cut in my rear tubular's sidewall. We were close to the end of the first lap, and a short distance from the pit. I rolled on my flat tire to the pit and switched out for my pit bike. In the meantime, second (Beth) and third flew past me, along with several of the cat. 3/4 women. I came out of the pit still within sight of them, and tried to catch back on. But second and third always stayed out of my reach. The course was so wide open that I could see them dueling back and forth. Lisa would gain on the power sections and Beth would gain on the technical sections. Eventually, Lisa put the hammer down on a hill and dropped Beth. I rode the last lap trying to maintain my gap. I didn't want to catch Beth--both because she is my teammate and I didn't want to knock her off of the podium and because I wasn't sure that I could. But then Lisa dropped her chain and Beth and I both rode past her for second and third place. So we got to share the podium with a pro! 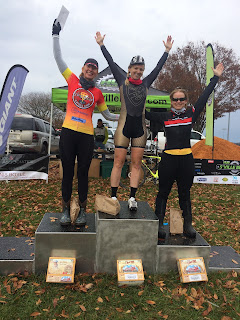 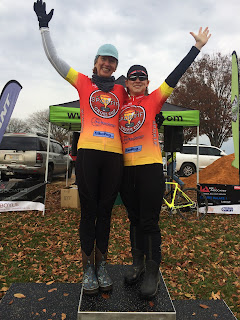 Winchester Apple CX
Apple CX may be the toughest non-UCI race on the circuit. It has several interesting features, so the course is long and hard, but it doesn't seem long and hard because you're always coming up on another technical section. There's a steep run-up (The Belgian Wall) into an off-camber and another run-up; there are a couple of super-fast single-track descents; there are lots of swoopy turns sections; everything flows together nicely and makes a really cohesive, challenging course!

I had a front-row start with some of the toughest women in the region. My nerves were so bad I was babbling. My hope was to mess up the start so I wouldn't have the pressure of having to hang with MABRA's best. Ever have a morning where you're not exactly tired but you don't feel like enduring the kind of pain necessary to perform well in a competitive race? That's how I felt. I didn't want to subject myself to the sort of hurt those women can dish out.

I really needn't have worried myself about feeling pressured to hang with them; I was off the back after the first three turns. I was so far out of my league, it was hilarious. There was one woman I could have out-ridden; she would put in big efforts on every power section (and I didn't care enough to try to match them) and then I would catch her wheel again in anything technical. But she really wanted it more than I did, and I was content to let her ride off with second-to-last place while I brought up the rear.

With all the 1/2/3s out of sight ahead of me and in no danger of being caught by the 3s and 4s behind me, I set about riding the cleanest race I could. The course was amazing, and it was so much fun to be riding without trying to win. I got DFL at Winchester Apple CX, and no one can take that away from me!

I have had a really good season, and it is nearly at its end. I have Taneytown this weekend, Capital CX the weekend after that, and BikenetiCX to finish everything off. I've seen the podium a few times and even won a few races! I've upgraded from cat. 3 to cat. 2. I'm content with what I've accomplished, and I'll probably take it easy and enjoy riding in the 1/2/3 field for those last few races (even if I'm DFL every time). I imagine next season I'll get frustrated with being at the back, and it will light my fire to improve. Until then, I'm content to bring up the rear!
Email ThisBlogThis!Share to TwitterShare to FacebookShare to Pinterest
Labels: cycling, cyclocross, race, race report