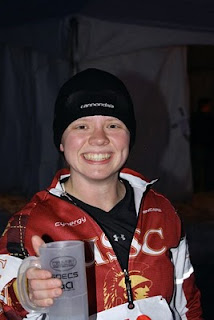 What a fun race. Last one of the year. Snow on the roads. Temps are biting. Wind chill is sub-zero. Sun is setting, leaving us all in the freezing shade.

And I certainly did not set records. But I did have fun.

First beer stop was at the start line. There was some issue with open containers in public places, so the "aid stations" had to be strategically placed. I had maybe 4 ounces of beer before the start (Budweiser Select 55, just in case you wanted to know). I lined up about halfway back, thinking that I didn't want to get caught up in the high-speed scrum at the line. The sidewalk was only about 4 feet wide, with hard-packed snow piled up on either side. So it was going to be tight quarters at the start.

I left all my best warm-weather gear at the Firehouse (where I take a spinning class, and which is actually, if possible, colder than it would be to ride outside), so I had no arm-warmers and (most importantly) no gloves. Well, I had a pair of $1 gloves. But I threw them away because they smelled like wet dog and sardines. Stupid, stupid, stupid. My hands were freezing during the first mile. I eventually caved and tucked them into the sleeves of my sweatshirt (trying to hold my beer mug at the same time, by the way). They were so cold it felt like my thumbnails had been stepped on by a full back. Then, at about the 1 mile mark, they just magically stopped being cold. Not sure what that was all about. I guess it takes me exactly two miles to warm up (I did one before the start). 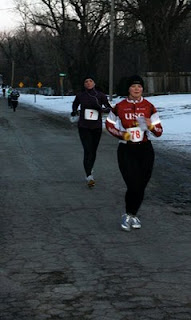 There was another woman who was running about the same pace as me from the beginning, and we'd kept each other close the whole time. Well, around the 1-mile point, I put in just enough of a surge to (in my mind) break her. Didn't look back, but I didn't hear her breathing or her footfalls anymore. Then we got to Aid Station #2. And I, being the fun-loving spirit that I am, said, "Ah! Now this is what I've been running for!" Upon which, the volunteer with the pitcher said, "Oh, well let's just fill you up here!" and filled my little plastic mug up almost to the top. That's gotta be 12 ounces. Crap.

So, wanting to keep the spirit alive, I walked quickly and tried to guzzle as quickly as I can. As with any endurance activity, you have to walk a fine balance between going fast and puking, and I definitely wanted to stay out of the puking camp. It took me probably 2-3 minutes to drain the beer and get moving again. And by that time my companion/nemesis from earlier had re-passed me and put a little bit of time into me. Because she didn't even stop, the pansy. 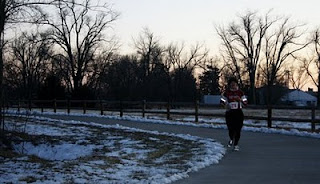 As I neared the turn-around, I started counting warm, female bodies coming back the other way. There were at least 10 in front of me. I hit the turn-around (I estimate it was about the 2 mile point) and turned on the speed. I was really surprised by how much faster I was running. It was like I'd just finished the warm-up, and was finally ready to race. I started reeling those girls back in. Shortly after the turn-around, the beer hit me; I went from zero to tipsy in about a second. Felt like I was running on clouds. I ran myself back into the top 10 while slightly drunk, then saw that my original running buddy was within reach. She had maybe 50 yards on me. I knew I could catch her; I had about half a mile left to go, at that point. I passed her not 200 yards from the last aid station. At this one, I told them, "Just a swallow!" I knew that she wasn't going to stop, but I was gonna do the beer thing right, dammit! So I stopped long enough for a swallow of beer, then tore after her again. I passed her with about 20 yards to go, and finished in a time of 27:15.

27:15 is 8:47 pace. Not fast, but definitely faster than I could have run last year. Did run last year, actually, at the Jingle Bell 4-mile. Just makes me wonder what I could do at a race with a decent temperature (or at least the right clothes) and no ice/snow on the roads and no stopping for beer. Although jury's still out on whether the beer helped more than it hurt or vice versa. 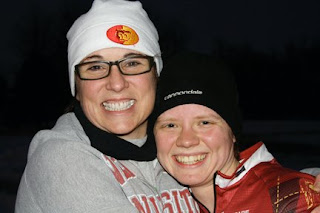 And a few more special things about the race: My client Kim came out too late to run in the race herself (the original plan), but did take pictures and cheer and run with me for a bit. And I got to meet a reader, Lindsey, who won the women's overall! Always nice to meet you lurkers, especially the local ones :-)

I had a ton of fun at this race. Felt like I got a good start to 2010. And I rediscovered my competitiveness in an unexpected (and unobnoxious) way.